At RIU we believe that sustainability and social innovation are the pillars of our CSR and those that mark the responsible identity of our human team. Each and every one of our collaborators are the creators of the sustainable awareness that characterizes this company since its beginnings and those who have guided its step towards a more responsible business with the environment and the community. Sustainability professionals, employees and guests in the 19 countries where our hotels are located, are today our sustainability ambassadors and the true architects of this gradual and responsible change that RIU Hotels is experiencing.

Get to know our team and their work as ambassadors for the company’s sustainability in this series of tribunes and testimonials:

Think about your last beach vacation. Imagine the warm glow of the sun on your face, the calming sound of the waves crashing along the shore – the perfect way to relax and restore your mind, body and spirit. There’s another essential piece of the landscape that you may not remember: the presence (or absence) of rolling sand dunes just behind you.

Though often thought of as merely the backdrop for a good beach day, sand dunes play an important role in maintaining healthy coastal ecosystems. Not only do they serve as a home for many unique species of plants and terrestrial wildlife, they also are instrumental in protecting inland areas from flooding and incoming storms. Sand dunes also serve as an essential barrier against light pollution from coastal developments, which can deter sea turtles from nesting, as well as disorient hatchlings that emerge from the nest, ultimately impacting their survival. Unfortunately, in high tourism destinations like Sal, coastal ecosystems suffer from increasing pressure due to coastal development, sand extraction, and unregulated vehicle use throughout the dune area. 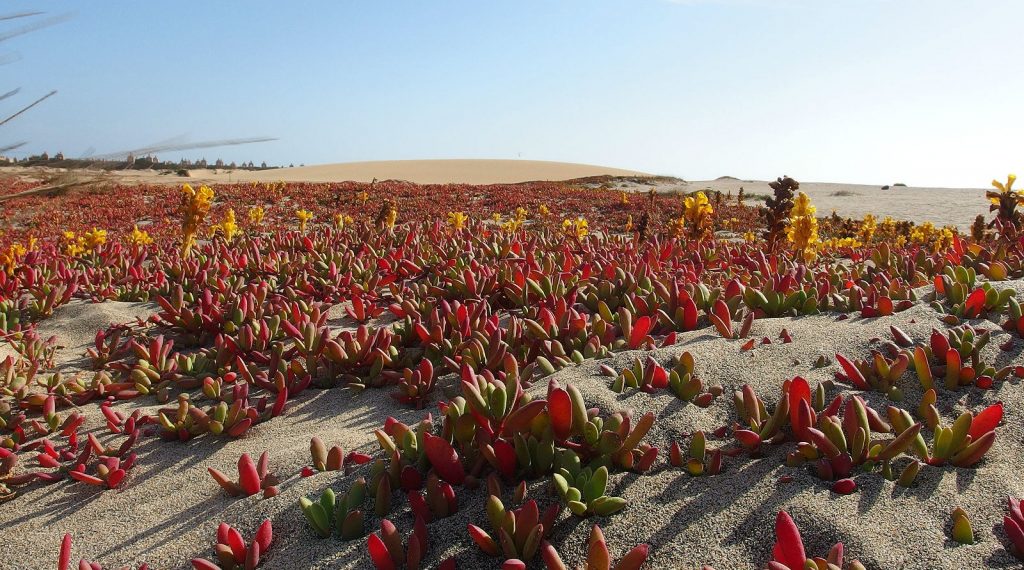 The iconic stretch of beach known as Costa Fragata is no exception. A hotspot for wind and kitesurfing, it is also home to a number of native and endemic plants, many of which are listed as critically endangered by the International Union for Conservation of Nature (IUCN). It also provides an essential habitat for the endangered loggerhead sea turtle, who comes to the beach to nest from June-October. Increasing degradation from high pressure tourist activities such as quad bike tours and unregulated wildlife excursions has left this ecosystem and others like it severely depleted and unable to recover without conservation intervention.

The success of that intervention depends on many contributors, but the star is a small but sturdy shrub called the Senegalese tamarisk, known locally as the Tarrafe. Like many coastal plants, it is well suited to dry windy environments – it grows low to the ground to reduce sand movement in high winds and its strong root system allows for continued growth even when parts are uprooted. 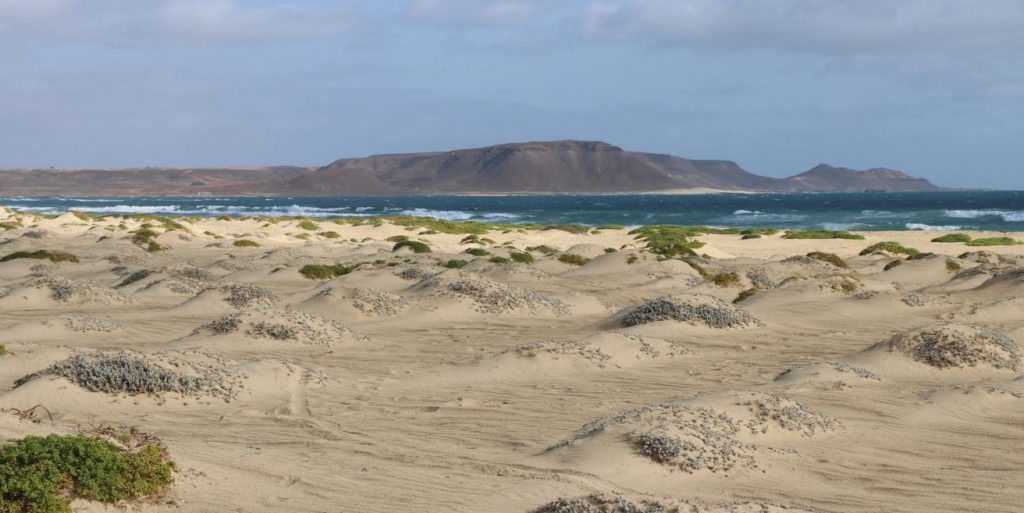 In Cabo Verde it is so emblematic that many areas throughout the archipelago are named after the plant (Tarrafal). This species has a very important role in coastal ecosystems as it helps build and strengthen large dunes. In Sal, it was traditionally used for firewood before the development of the island, which caused dramatic reduction in its population. As a result, it is now a protected species. 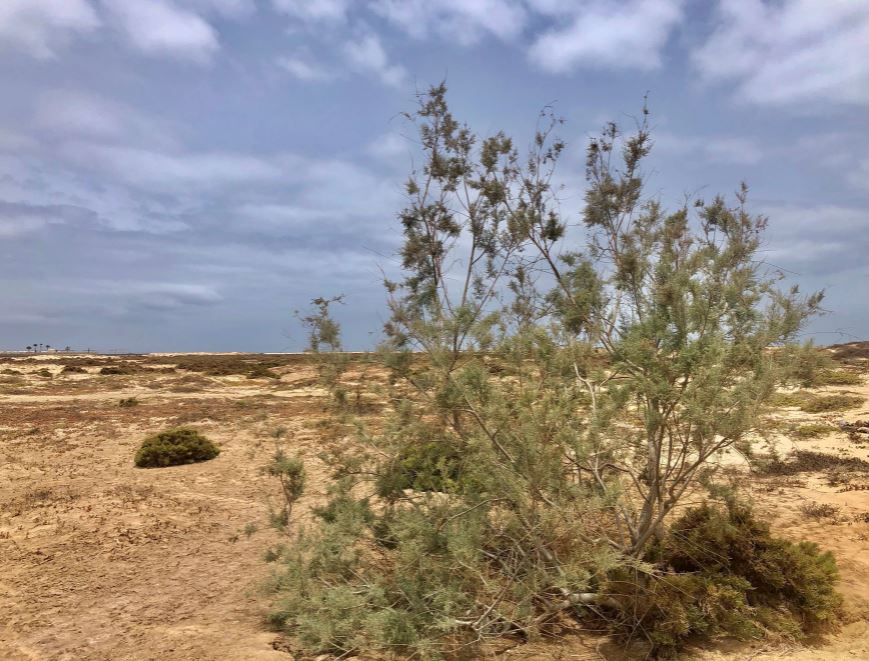 Together with our partners at RIU Hotels, Protected Areas, and the Ministry of Agriculture and Environment, we established an initiative to reintroduce the Tarrafe to local ecosystems, through the creation of a plant nursery on the beachfront of the RIU Palace in Santa Maria. With the help of staff, local authorities and visitors to the hotel, we have planted over 200 seedlings. Once they have grown to a suitable size, we will then replant them along the coast to support the regeneration of local dune ecosystems. 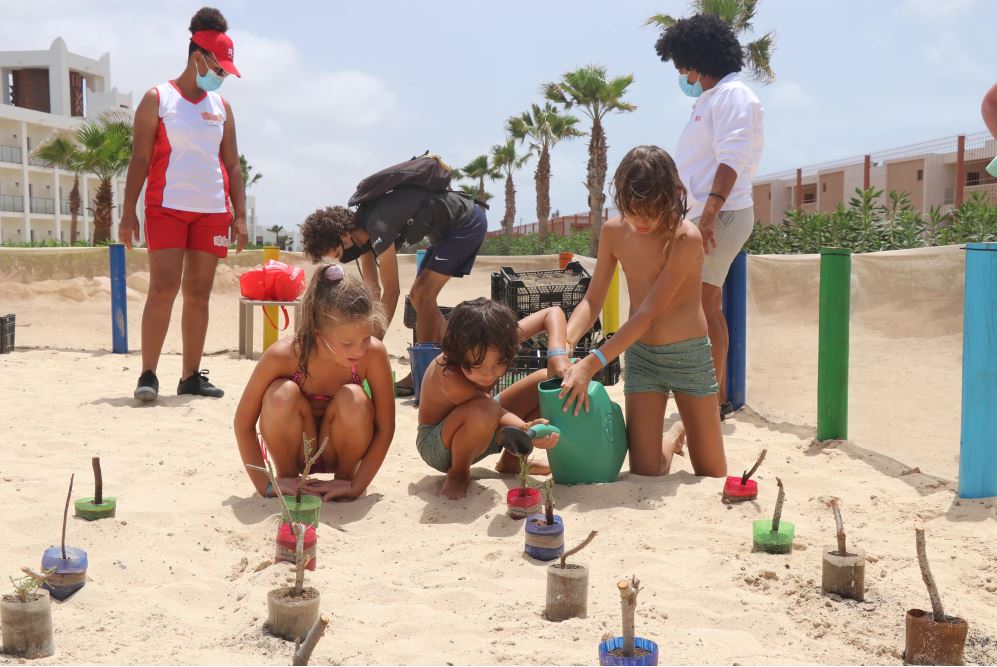 These dune ecosystems can only thrive if residents and visitors alike maintain the integrity of the ecosystems. So, what does this mean for that beach vacation you’re planning? First, it is important to follow designated pathways, and avoid trampling on the dunes and vegetation just behind the beach. If you plan to go on a quad bike or any other vehicle-based tour, make sure the company conducts tours responsibly, and also follows the designated paths – and don’t forget to to leave the beach just as you found it – or even cleaner! 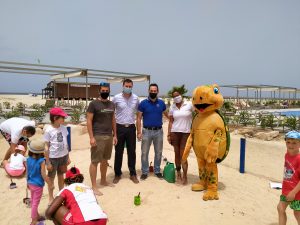 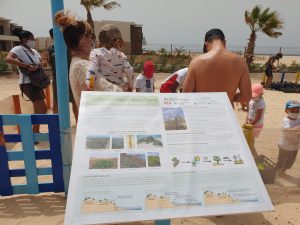 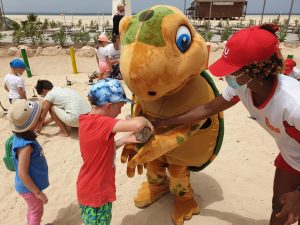 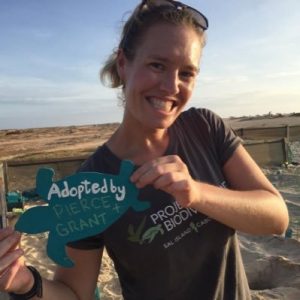 If we had to define a concept for resolving the eternal conflict between environmental conservation and economic development, that concept would be none other than sustainability and rational use of resources. The humpback whale currently represents one of the main tourist attractions of Cape Verde. A population of just a few hundred individuals of this species reproduces every year in the coastal waters of islands like Boa Vista and Maio between February and June. Over the last 10 years, thousands of visitors to Boa Vista have contemplated one of the ocean’s most iconic animals. 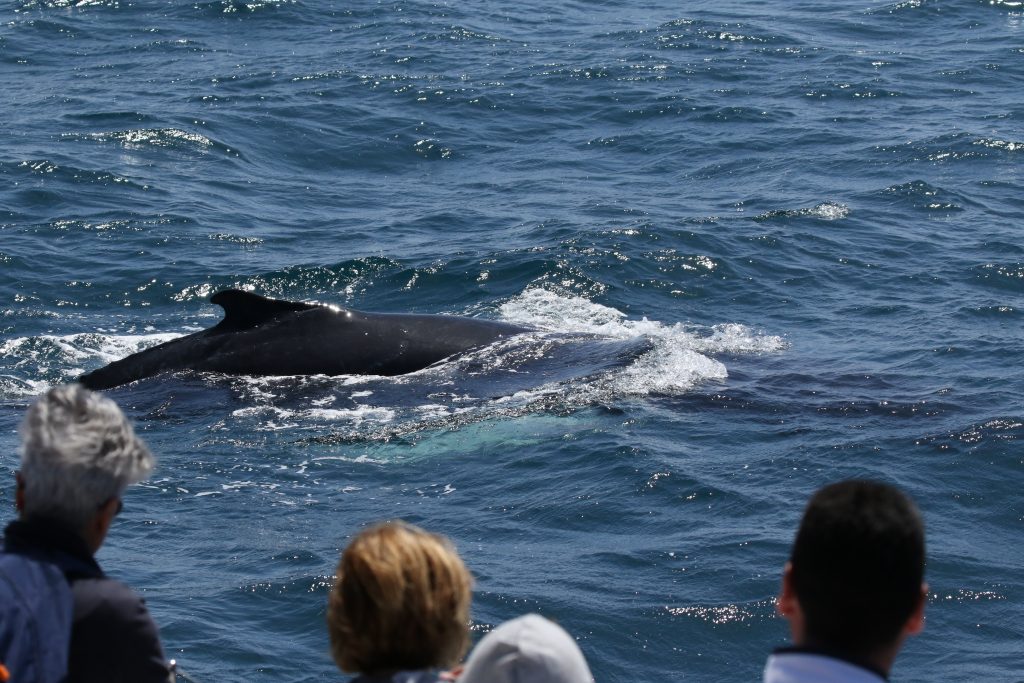 For the NGO Bios.CV, the sustainability of this fragile resource requires declaration of a zone for the protection of mothers and their young off the west coast of Boa Vista, adoption of a code of good practices by operators of whale watching excursions, and greater involvement and support from tourism agents in monitoring and conservation activities for this population in danger of extinction. 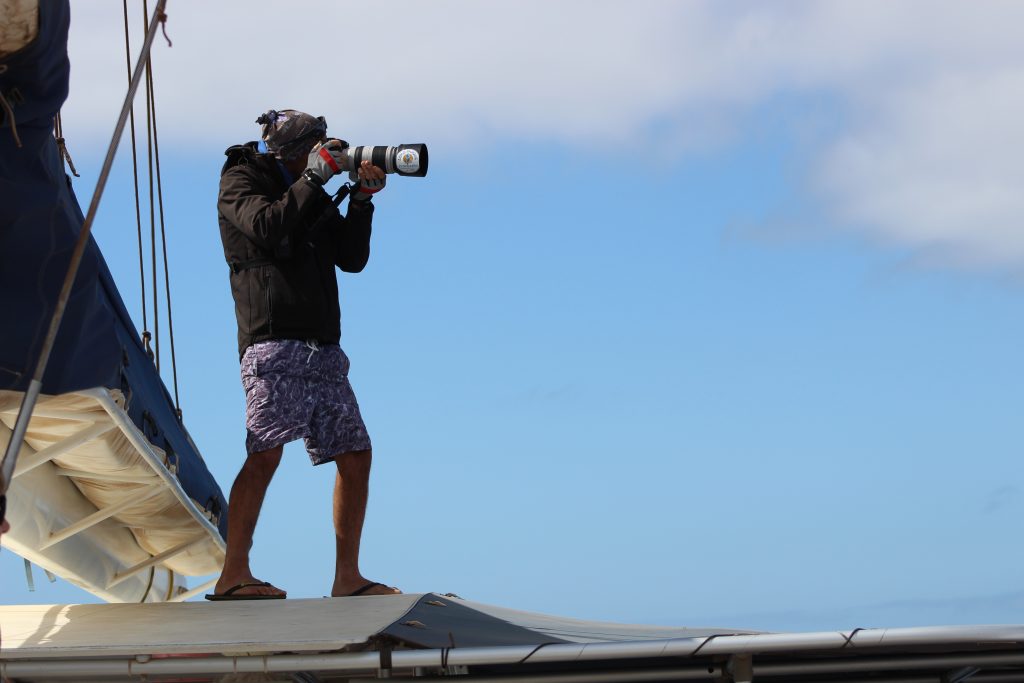 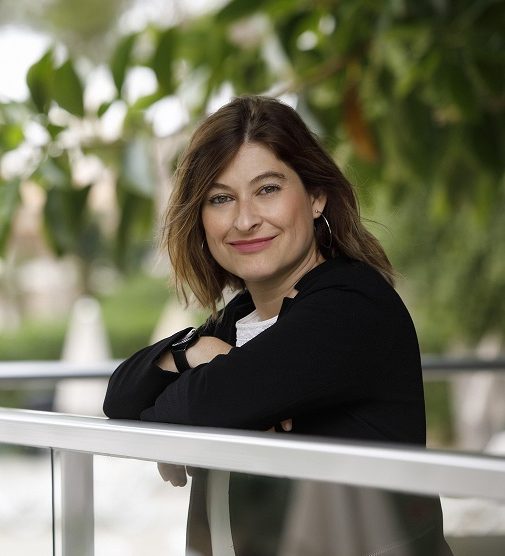 The internal transformation of RIU hotels

After a year like 2020, in which our business has been put to the test and we have had to adapt to continuous change, it seems that a road towards an unprecedented transformation has opened up at RIU Hotels as well. In record time, many significant changes have taken place in our hotels and services, such as creating and incorporating new sanitization-health protocols to cope with COVID-19, training the entire active staff to apply these measures as effectively as possible, and reopening hotels, the first ones in many destinations and with strict safety protocols (masks, partitions, etc.). Unfortunately, some hotels had to close when flights to our destinations were limited, establishments that later reopened for just weeks before having to close their doors again due to lack of customers.

Just thinking about the work this has meant for our teams, I can’t help feeling deep respect and admiration for all the people who have made it possible with hard work and dedication. They have made the difference in a year of constant challenges, and they should take pride in this. But it hasn’t been easy. When we had to send our staff home for months, morale deteriorated and we sensed an atmosphere of discouragement among us. It was inevitable.

However, the vaccination process is underway, it seems that we can recover our good cheer thanks to that slight uptick in bookings over Easter, with which we have reopened in destinations as popular as Cape Verde. But we can’t stand still. We need to recover our enthusiasm with new projects that excite us, without forgetting the scenario in which we find ourselves. In this sense, and in the Corporate Social Responsibility area, we are generating actions and projects designed to make our business model more sustainable through long-term circular economy strategies. Above all, because the pandemic has shown us in stark relief that we cannot ignore the challenges of climate change facing us. We cannot continue extracting resources as if there were no tomorrow, because there is a tomorrow for our children, and because we cannot ask these new generations to pay for the errors of past generations. It’s everybody’s responsibility. And so, the best internal transformation we can undertake is to open up a road to a more responsible, sustainable and increasingly circular form of hospitality. That would be the best bet in the years ahead of us for recovering a battered hospitality industry and transforming it into something better than it was before the pandemic.

TESTIMONIALS FROM OUR AMBASSADORS 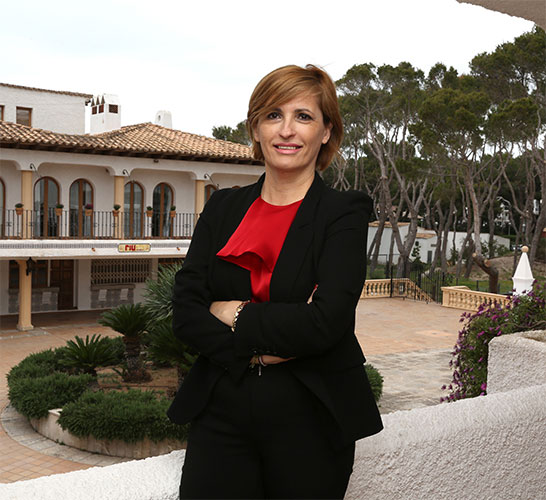 “All RIU directors are aware of every drop of water we use. That’s why it is important for us to choose more efficient machinery and appliances, because they optimise the hotel’s energy and are kinder to the environment. This is the case with the washing machines that we use to wash items like drapes, net curtains, dishcloths and tablecloths, which have an A+++ energy efficiency rating. 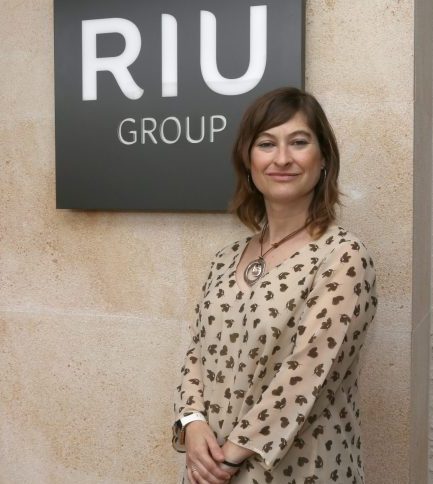 “The second generation of the Riu family, my grandparents, Luis and Pilar, learned the business by listening to their first customers’ concerns. They were German guests who had travelled extensively and they taught the family to look after the details to offer a friendly and attentive service. This is the basis of a very successful method that makes RIU stand out for customer satisfaction, which is the company’s number one value. Because, as we see it, customer satisfaction is our raison d’être. Without this value, our company would disappear.” 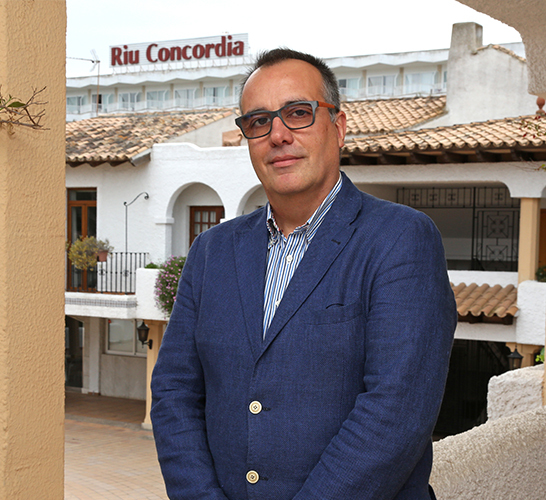 “At RIU’s purchasing department, we have been evolving from the outset and are now more environmentally committed and aware than ever. When making decisions, we consider the social and environmental aspects of the product over its life cycle. For example, we take into account the product’s past, i.e., where it comes from, how it was produced or made, then its present, its transport, use and durability, and of course, the product’s future, its final destination, its management as waste and the impact it will have on the environment.” 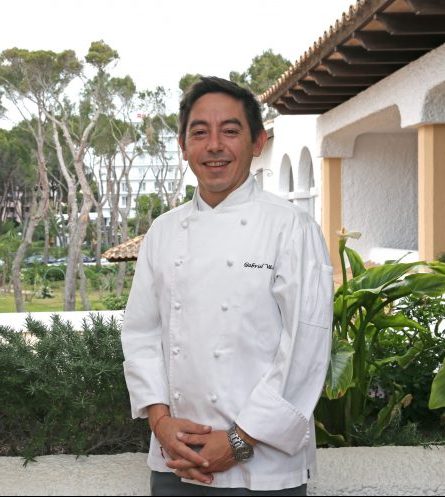 “At RIU, we offer healthy alternatives and vegetarian options in all our buffets and à la carte restaurants. In addition, in our European hotels and as the law indicates, we have an allergen report for each and every dish on the menu at our customers’ disposal.” 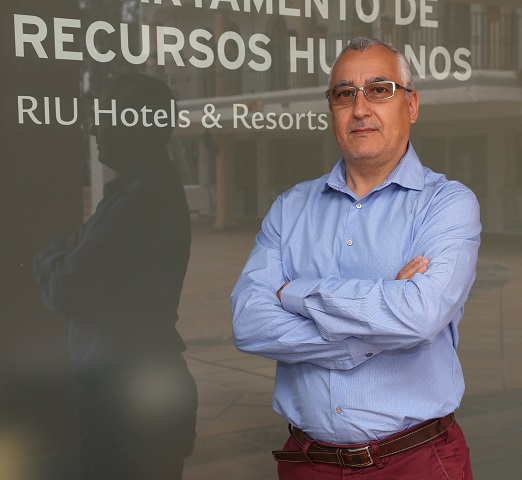 Head of HR for the Balearics and Corporate Head Office

“Hiring local staff in all of our destinations is a very effective way of fighting against exclusion and the lack of work and training opportunities.” 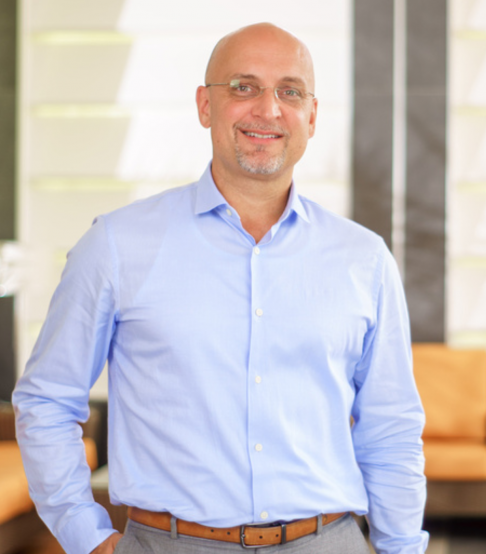 “It is our duty to integrate into the local communities where we work, to respect, support and protect the local culture and care for the natural environment. We also study what actions need to be taken to improve the quality of life of local people and of the surroundings and collaborate with the local community.” 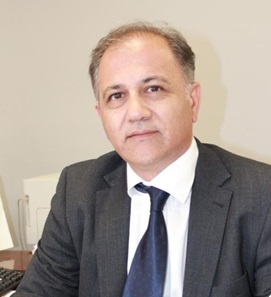 “At RIU Hotels, we see training our collaborators as ongoing learning throughout their professional life to achieve the best preparation and apply the lessons learned to their day-to-day working method.” 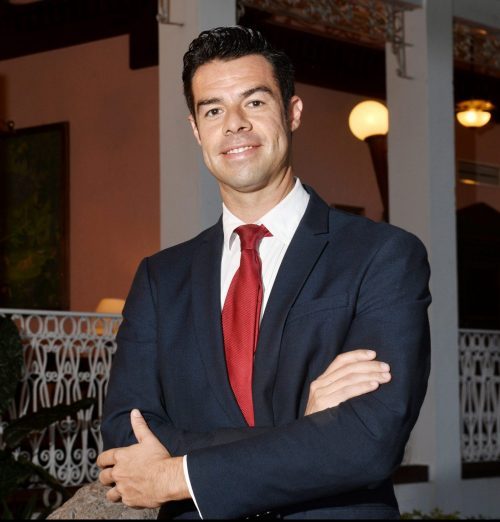 “Since 2009, the chain has supplied rent and maintenance for an orthopaedic clinic in Negril, Jamaica, that benefits from the collaboration of local volunteers and orthopaedic specialists from Canada and the USA. Over these 8 years of sponsorship, more than 300 Jamaican children have been treated.” 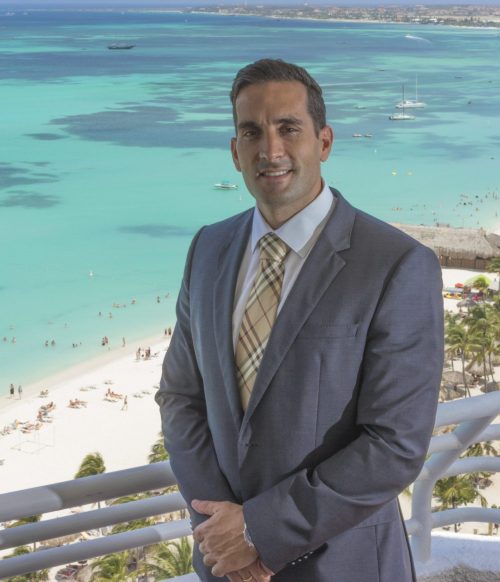 “The local community’s involvement is very important to RIU in Aruba and around the world. Every day, we strive to make our hotels a second home not just for guests but also for our staff. We also try to support foundations whose work has a positive impact on Aruba’s society.”

Keep reading about A Responsible Identity
ABOUT US