Luis Riu: “My passion for music led me to become a DJ that lives for the crowd” 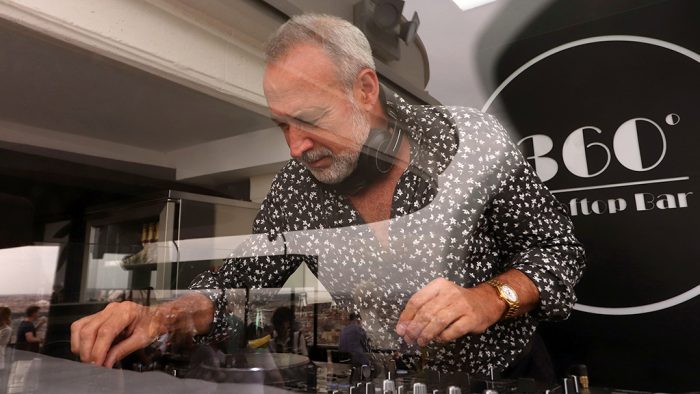 I fell in love with music at a young age. I didn’t realise this until I was a bit older, but I think that is the best way to explain it. I didn’t just like songs by Queen, Barry White, or the much-loved Raffaella Carrà like my friends and family did, they positively thrilled me. It was the 70s, the heyday of dance music, and I dreamed of and lived for music and clubs.

Over the years, I built up a massive record collection. I just couldn’t get enough. I always wanted to be on the crest of the wave and discover new sounds. This love for music led me to take up DJing as a hobby, and this continues to be my true passion. I transform into a different person when I’m in the DJ booth. It’s so fulfilling to see the crowd having a good time, dancing and singing, and this is something that I want for my hotels. I completely forget the stress of daily life and recharge my batteries. 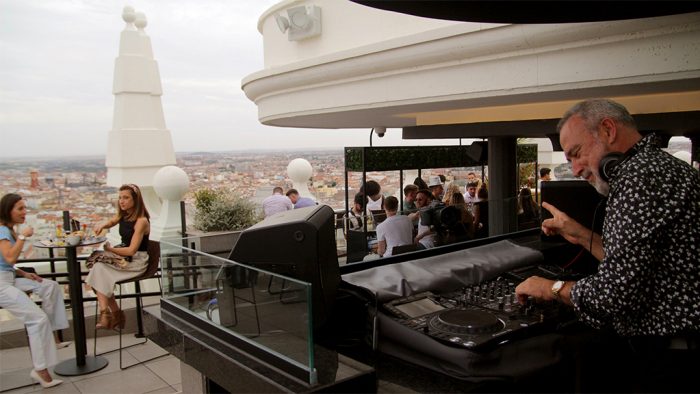 Luis Riu, playing music in his DJ set at the terrace of the Riu Hotel Plaza España in Madrid.

DJ Luis Riu, from vinyl records to the digital realm

Things are so different nowadays. Before, if you wanted music you had to go to the shop and buy vinyl. In fact, my first small business was recording vinyl onto cassettes. I sold them to my friends and used the money I earned to buy more music. But it was never enough and I often sold my old vinyl records to buy new ones. I was sad to let them go, but I really wanted to have all the latest music. I’ve occasionally thought that this is similar to the hotel business in some ways. Sometimes the financial value of an assets decreases and you have to sell it to be able to invest in a hotel or area with a greater pull factor and future prospects. 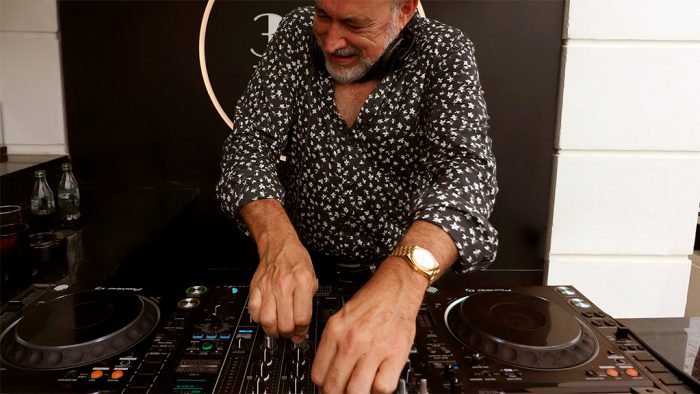 Luis Riu with his Pioneer mixing deck during a music set in the 360 terrace at the Riu Hotel Plaza España.

In the early 90s at Pacha nightclub in Punta Cana, I took the leap from enjoying my hobby in private or as a member of the audience in a club to putting myself in front of a crowd. I DJed there every Saturday. We threw some amazing parties and there was such a buzzing atmosphere, filled with dance music, merengue, bachata and salsa rhythms. Over these five years I had an amazing time and progressed as a DJ, back when we still used vinyl records.

When I returned to Spain I stopped DJing publicly for a few years. I would DJ at home or at family parties, but technically speaking I wasn’t very good. It wasn’t until my son Luis Riu Jr. gave me my first computer and helped me use it that I went digital and started looking for and downloading music online.

12 hours per week to search for and classify new songs

Partying means being happy, having fun, forgetting your worries and enjoying the moment. But before taking to the decks, I have to meticulously prepare my session. I spend about 12 hours per week on my hobby, which involves looking for new tracks, downloading them and classifying them.

Finding tracks is what takes the longest because, as I like so many different kinds of music, I have to listen to lots of songs. I listen to the radio, follow several YouTube channels, iTunes, Beatport … I spend hours and hours listening to music. In fact, my children often tell me about new tracks they hear when they come out, or that they’ve heard somewhere or on the radio. They bring them to me like a kind of offering because they know I love music so much. What’s more, because they’re young they help me keep up to date with what’s popular at the moment.

What is the working process with the new songs for the DJ sets?

I currently have almost 5,500 songs classified. My children don’t like it when they tell them I have a paper copy of all these documents. They think anything that’s not digital is old, but that’s just how I’m used to organising myself. I write down each song with the title, beats, the cue point and minute and second. I also have several backup copies of all my collection. I’ve spent so much time collecting and classifying all this music that it is priceless to me. If I lost it all, I’d stop DJing. I don’t have enough time left to get it all back. That’s why I keep one of my backups in a safe.

‘I’m not your average DJ’

Nowadays I have a Pioneer CDJ 2000 deck, and if I DJ in another venue I take my music with me on a USB flash drive where I’ve already marked all the cue points of the songs. That’s why I like to take my own deck if the one in the venue is different to the one I have at home so everything is better prepared and I can focus on the crowd.

Some DJs don’t look at the crowd. They are completely absorbed in what they’re doing. That’s their style and they’re also very successful, but when I’m DJing I really like to connect with the audience. It doesn’t matter if I’m playing house, dance, reggaeton, Latin, flamenco-rumba or oldies, for me the most important aspect is building a connection with the crowd. If you look at them and connect with them, you can give them what they want and, in return, they give you a really powerful energy. It’s a great feeling. 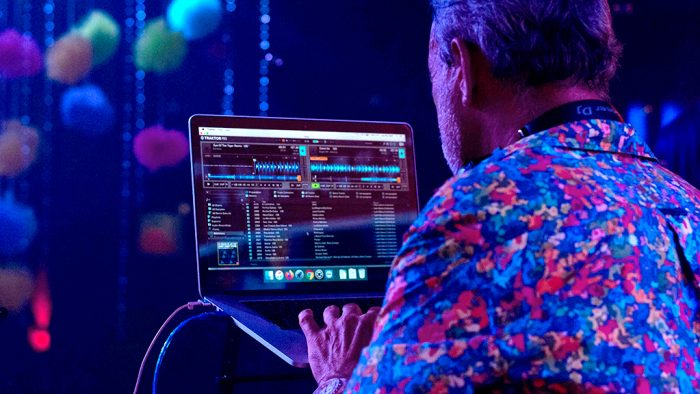 Luis Riu working on his songlist during a DJ set in Mexico.

In many ways I’m not your average DJ. I’m so focused on the crowd that I concentrate on making them happy. Something that DJs often don’t like is when people come up to make requests because it’s sometimes not a good time and you’re concentrating or the song they want doesn’t fit in. However, I always take a pen and piece of paper with me so they can write their request down. It’s much easier that way because of the noise and because I’m focused on DJing. If I can make that person happy I will do, it’s no trouble for me. Maybe it’s this vocation for service that is so deeply embedded in our company and that runs so deep in RIU’s history. It also affects how I select my tracks. I’m guided by what I like and what’s popular at the time, but above all by what works with a particular crowd. At the end of the day, the more the crowd enjoys it, the more I get out of it. 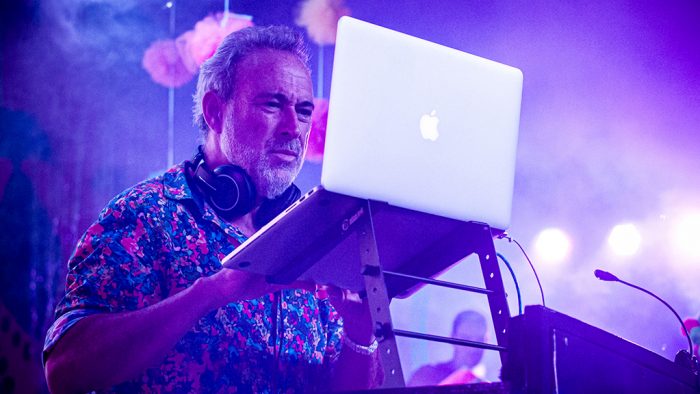 Luis Riu has a list of 5,500 classified songs that he plays during his DJ sets.

Greatest hits in a long DJing career around the world

This is the key to be able to do long sessions. My personal record was a birthday party with 100 guests that started at midday and carried on until 1 am: twelve hours giving my all on the deck. By the end I was completely exhausted, but happy. This is just one of hundreds of stories. This hobby has brought me a lot of joy.

However, my session during the Riu Get Together Party at Riu Tequila, which took place in November 2019, is my favourite to date. There was a great atmosphere at the Neon Party, with a crowd of 3,854 people of all ages and nationalities. They were clients of the RIU hotels at the Playacar complex in Mexico. It was a really fun atmosphere, where everyone had a great time and danced the night away. It was also spectacular due to the sheer size of the party.

In fact, as I told you not very long ago, the Riu Parties we offer in several of our hotels are a result of my passion for music. We’ve had to suspend them because of the pandemic, but this product is working exceptionally well. I base myself on the same principles as in my sessions. People like to be at the centre of their own fun. They want to dance, sing and work up a sweat. They don’t want to just sit down and watch; they want to be on their feet and feel like they’ve had one of the best evenings or night of their life when it’s all over. A good DJ is key to achieving this, but performances, dancers, lights and the venue also play a big role in creating a good atmosphere.

A hobby developed with the support of the RIU family

It’s my wife Isabel that once again has to deal with the least pleasant side of this passion. Just like when I convince her to join me on a holiday to the Maldives that end up being a small business trip. When she was younger, she used to tell her friends that she’d never go out with a DJ because they’re the first to arrive and the last to leave. They’re in the booth while everyone else is having fun. Funnily enough, she ended up with me. It’s not just the parties where I’m DJing while everyone else is having a good time with their partners and friends, but also all the time I spend downloading and classifying songs at home. She herself says you can “never say never”, albeit with a certain tinge of resignation.

Playlist with the songs selected by Luis Riu for the RIU Hotels Spotify channel.

I know that nowadays music fans follow their favourite artists or keep up with all the newest tracks on Spotify. They’ve been encouraging me to create an account for some time, and today seems like the perfect moment to present the RIU Hotels & Resorts Spotify channel.We have created a list as a sample of the wide range of music I use as a DJ. There’s some oldies, all kinds of beats and a few songs that are set to be summer hits. There’s something for everyone, just like in my sessions. Enjoy the summer and the music!

Share the post "Luis Riu: “My passion for music led me to become a DJ that lives for the crowd”"

RIU and its new training concept