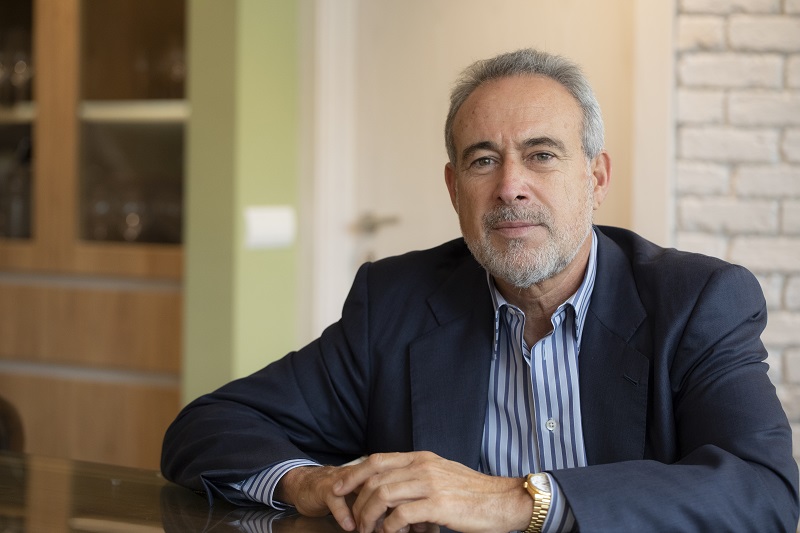 Luis Riu supervises the innovation projects that have begun in RIU after the COVID-19 crisis.

We are still engulfed by the crisis Covid-19 has caused. Our industry is one of the worst affected by the pandemic due to the direct impact that travel limitations are having on tourism. Uncertainty still looms over our daily work and we are unable to make projections, not just in the medium- or long-term, but even for the coming days and weeks. But, as I always say, RIU is defined by action. So, during the hotels’ total closure in March, we got to work immediately on the post-covid safety protocols that would enable us to reopen, and likewise, these months have allowed our heads of departments to use their talents for innovation, adaptation and optimisation.

Today I’d like to tell you about a positive effect, if you will allow me to describe it as such, that has arisen from this situation.

RIU’s food area, a source of innovation with 5,850 employees

Many areas have developed very interesting projects over the last few months. Some have been a direct consequence of the crisis, such as the thorough overhaul of the cleaning, health and hygiene areas, and others have been made possible due to the time that became available when the pace of our work was forced to slow down. The latter is the kind of change that has taken place in RIU’s food area. 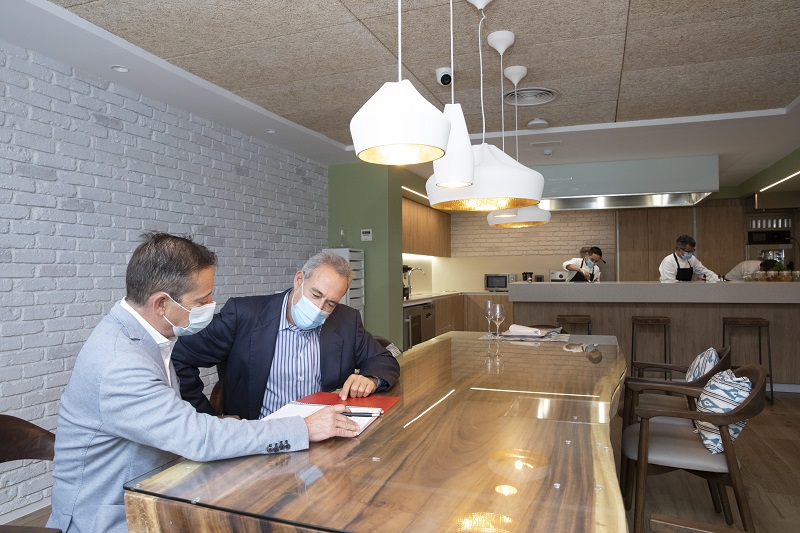 Luis Riu in a meeting with Carles Madrenas, responsible for RIU’s product.

It is made up of five chefs at our headquarters, in addition to a further four located in Jamaica, the United States, Mexico and the Dominican Republic. They are in charge of creating and supervising the full culinary range of all RIU hotels. In total, they are currently responsible for 264 restaurants with 21 different specialities, as well as 99 main restaurants where our famous buffets are served every day, both on beaches and in cities. To make this possible, the food area has a total of 5,850 employees worldwide.

The team is headed up by Ignacio Álvarez, who reports to Carles Madrenas, member of the board with overall responsibility for our product (food, bars and restaurants, reception, housekeeping, entertainment). Ignacio himself, with some of his company chefs, travels personally to each opening hotel to supervise the launch of the food range in every hotel. As these trips have been cancelled, time became available, which they have dedicated to analysis and development. All this was after they had already taken part in the development of our safety protocols ready for reopening, reviewing the range, refreshing presentations and adjusting the programming and staff to the new situation. 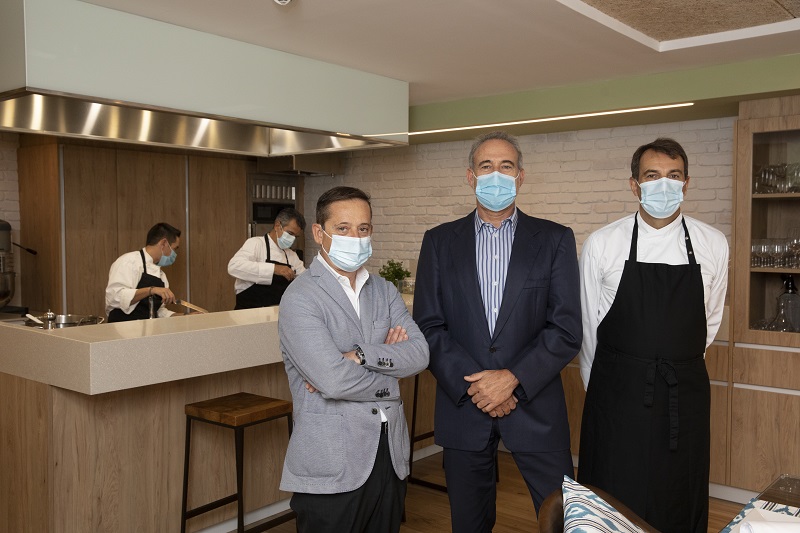 After such an intense period of work, one of the projects they carried out was an analysis of customer consumption and evaluation, in order to review the culinary options offered by the restaurants. As a result of this study, the stock lists have been overhauled in collaboration with the purchasing department, which has affected a total of 5% of items. And we are talking about thousands of products. This overhaul results in greater satisfaction and cost optimisation, which are two key pillars of the business.

This work is incredibly valuable, but it is much more attention-grabbing when the kitchen team has time to create, and this too has happened in recent months. The hotel Riu Palace Zanzibar reopened recently with a new Greek-inspired restaurant, which is unique within the chain.

The chefs developed a distinctly Mediterranean menu inspired by the Greek islands’ fish and seafood restaurants. The menu contains only products from the sea and the kitchen garden, and I was lucky enough to try it with my sister Carmen and other members of the board at El Taller. The new restaurant, “Ia”, is impressive by virtue of its unique views, not to mention the simple and elegant décor that the bar and restaurant team have designed.

3. A kitchen space to experiment in, right at RIU headquarters

All these details, from the development of the dishes, the menu options themselves, to the style of service, were designed in the new kitchen space we have just opened at our headquarters. In fact, the menu and taster dinner for “Ia” restaurant were the first project to be devised, developed and presented in this new space. 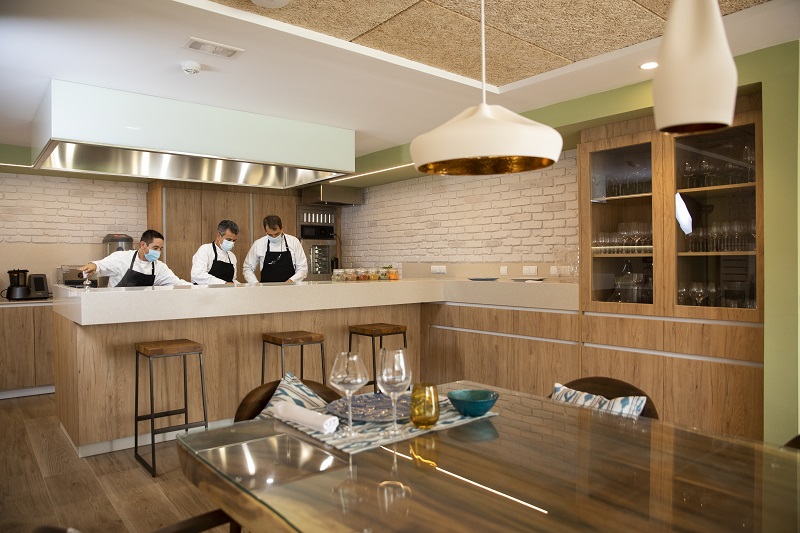 The company chefs had been requesting this for some time and it is now more important than ever. For the chefs, it is a space to develop, experiment and change. It means having space and the tools they need, just steps away from the tables where they can make their ideas a reality. 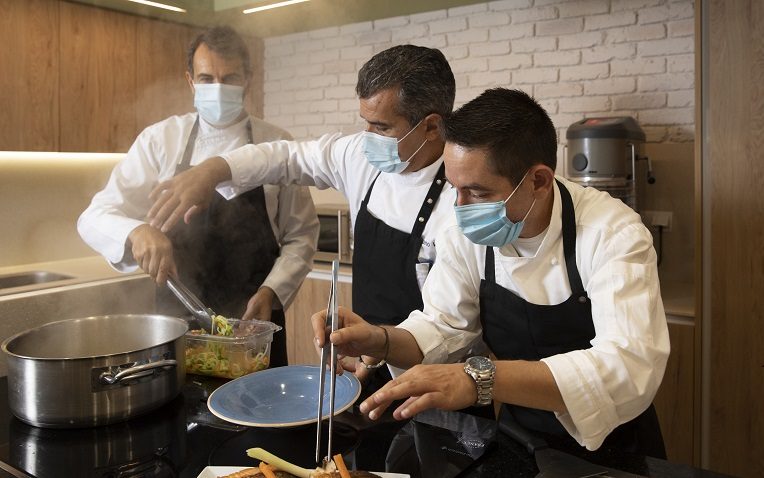 But it is also a place where recipes and dish presentations can be filmed and photographed, now that remote training has become a necessity. Although El Taller offers very valuable flexibility and freedom, the chefs will continue to travel in person whenever it is possible, because we still believe that the personal touch is irreplaceable. In fact, Ignacio has recently been in Tenerife with me to review the last details and finishing touches of the hotel Riu Buenavista before we present its complete renovation to our customers.

Luis Riu: ‘Congratulations on a great job’ to all the RIU staff

It is a source of great pride for me to see that even this most difficult situation has not dampened the spirits or creativity of RIU’s team. These are hard times. Every last member of staff is making great sacrifices, so once again, thank you all so much and congratulations on your great work.