We arrived at the Riu Sri Lanka on a Monday at mid-morning. We had no sooner parked than they were already smiling at us and offering us a welcome drink. We checked in quickly and, on the way to our room, they explained the different services, activities and shows we could enjoy. The good part was beginning!

We had a day and a half ahead of us to relax completely after having toured Sri Lanka for nearly one month. After unpacking our bags and taking a bath, we went to a hut that oddly enough serves as both a towel station and a library. There we got our towels and immediately took a first dip in the pool.

They had told us about the River Safari, an excursion down a nearby river in which they take you by boat to visit various places. But in that first swim we decided that in our case, since we had only a day and a half, we would opt to enjoy the hotel and all its services to the utmost, without leaving the premises for anything. According to what people we met told us, this excursion is worthwhile.

In the morning, pool and sun

After drying off a bit, it was time to explore the rest of the hotel and take some photos. We went to see RiuLand, where several kids were enjoying the slides, and also went to see what was going on in RiuArt, which offers artistic activities and yoga for adults. 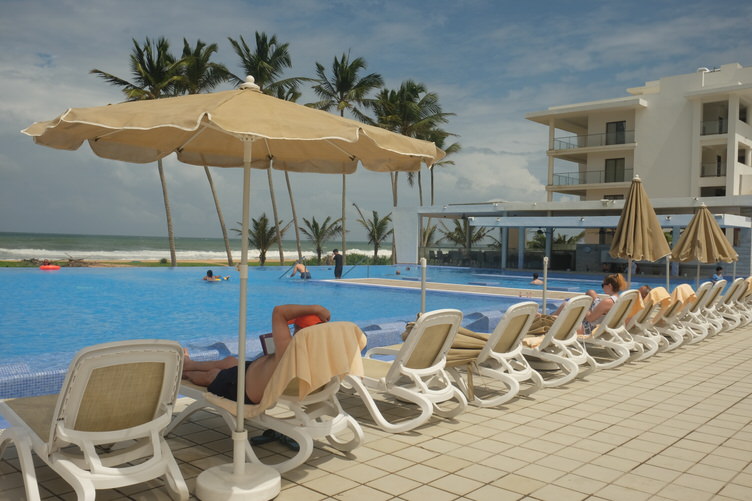 In our first stroll around the hotel, we were struck by the number of Indians, Arabs, Chinese and even Sinhalese staying at the hotel. We would have expected all the guests to be Westerners… As they told us, this is because it is the first all-inclusive hotel to open in this part of the world, and the Asian customers are taking to the concept enthusiastically.

We went back to the lounge chairs and worked up an appetite for lunch with a beer brought by our ever-smiling friend Darshana. What a pleasure the pool bar is. You can order and drink your beer without leaving the wáter! 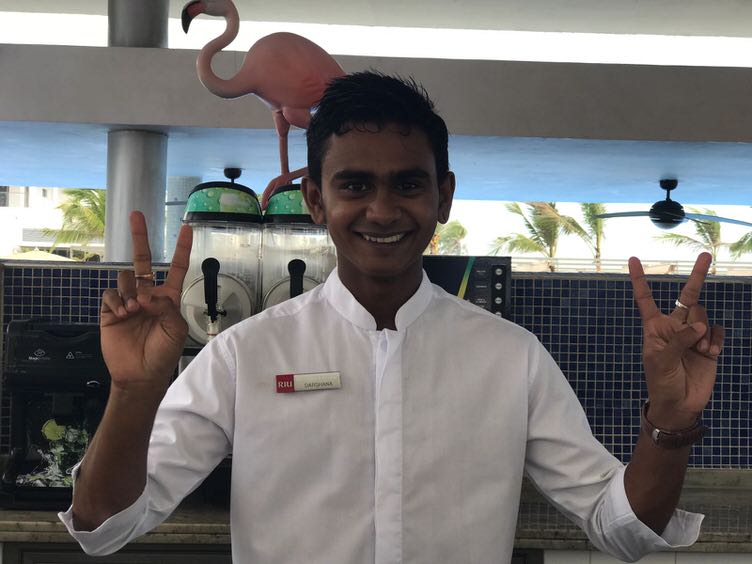 After eating at the buffet, we set up camp there for a good while, had some cocktails in the sun, continued taking photos, and met a couple from Madrid who ended up being our companions for practically the rest of the day. 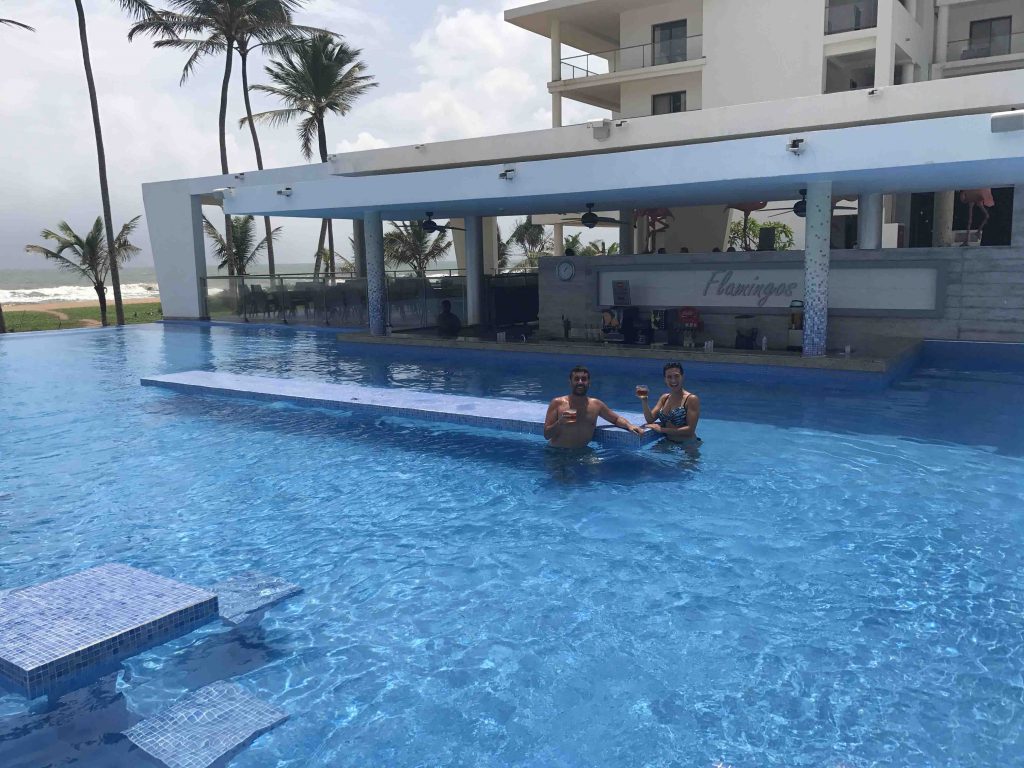 The Riu Sri Lanka is like a small town where little by little you get to know people, both customers and employees. The tranquillity and pleasant atmosphere of the place encourages it. If you coincide with someone in an activity, it’s very easy to end up chatting over a beer at the pool bar. As for the employees, I’ll just say that the second day they were greeting us at breakfast with a charming buenos días in a Sinhalese accent.

In the afternoon, a siesta and a massage

After a long spell of cocktails and laughter, it was time to go up to the room for a short rest. We turned on the TV, more out of curiosity to flip through the channels than a desire to watch anything. It was mounted on a bracket that pivots 180 degrees so that you can watch it from the sofa or the bed. Predictably, we fell asleep very quickly.

After the siesta, it was time to go to the spa, and besides we had booked a massage. The spa has two pools with different water temperatures. There we met a Sinhalese gentleman who had worked and lived in Germany. He had come with his wife and two children to visit the rest of the family, and they had decided to spend part of their holiday at the hotel. A lovely family that we ran into again at the swimming pool the next day.

After letting our skin get a bit prune-like, it was time for the massage. Our masseuses were a pair of very professional young women, and they gave them to us simultaneously in the same room. It lasted for an hour more or less, and they hit the all the right spots. Both of us left very happy. They also had a good laugh with us while we were taking photos. More smiles at the Riu…

At night, dinner and Grease

The massage ended right at the time we had arranged to meet for dinner. In fact we arrived a little late at the Italian restaurant, where we had reserved a table with the couple from Madrid. The dinner consisted of an appetiser, a main dish and dessert. The pasta tasted wonderful after so many days of eating Asian food. By then we were in the mood to get back to familiar flavours… 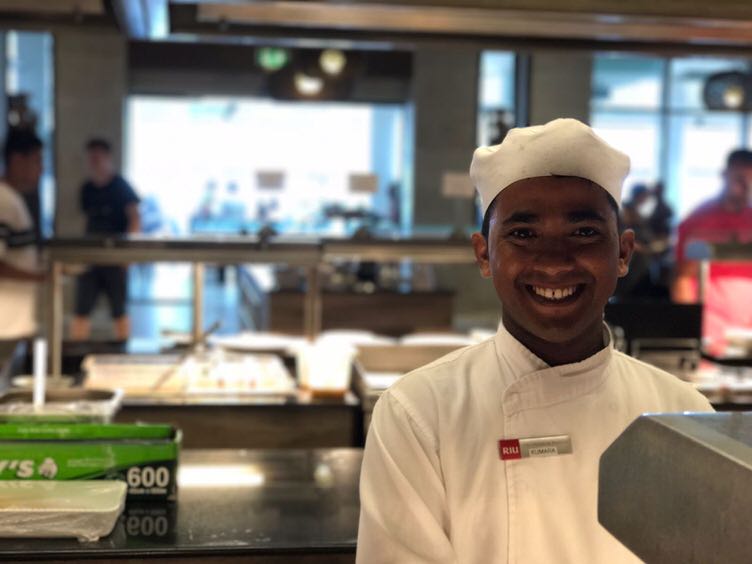 And after dinner it was time for the show. Actually we were less interested in seeing Grease than the performance of Sinhalese shamanic dances also offered, but that was what was on the schedule that day. It turned out to be great fun, though less so for us than for the Asian guests, who, from the looks on their faces, weren’t at all familiar with Grease.

On this occasion we all had a good laugh. When it was over, we still had enough energy for a drink in the hotel discotheque before going back to the room to sleep.

The next morning, relaxation

We always get up early in hotels because we’re tempted by the variety of the breakfasts they serve. We love to take our time eating breakfast on the days we don’t have to go to work. That day at Riu was no exception. As always, we went in totally planning to exercise self-control and left feeling ready to burst from having wanted to try everything. Well, what’s one day?

After breakfast we went to the pool to enjoy the day. Our plan was pool and more pool until mid-afternoon, when we would be leaving for the airport. Before lunch we talked a bit with Darshana over the obligatory beer and we were teaching him some expressions in Spanish. After eating lunch and a taking siesta, it was time to check out.

We arrived at the hotel very predisposed to take it easy and go with the flow, but the entire staff took such good care of us, with that perpetual smile, that when we left we were also grinning from ear to ear, despite our regret that our holiday was ending. By the way, we’re Jose and Gloria from El viaje me hizo a mí and we were at the Riu Sri Lanka in August 2017, two days before its one-year anniversary.

The ClubHotel Riu Oliva Beach Resort, the Jaubert family’s home away from home