The pages of RIU’s story are overflowing with special moments. There are so many pages full of beautiful memories for the chain of which you have been an indispensable part, because without you, nothing would have been possible. Today we would like to take a look back at those special moments that have marked major milestones in RIU’s expansion: the very first times we touched down in some of our destinations.

Although the mechanics are the same, opening in a new environment is always a challenge because everything is different, you have to take into account all the aspects of the new place where the hotel is located, but you also have to understand the public that is going to visit it and adapt the product to the two environments. And the best thing of all? That the result is always the same: your smile.

The Riu San Francisco hotel is special because it was the chain’s first hotel and also the first hotel in Mallorca. As we explained a couple of weeks ago, this establishment, located in Playa de Palma, is where the Riu family, which owns the chain, began their hotel business in 1953. That is why it is so special, because the headquarters are also located in this destination, where there are currently four other hotels: the Riu Concordia, Riu Festival, Riu Playa Park and Riu Bravo. 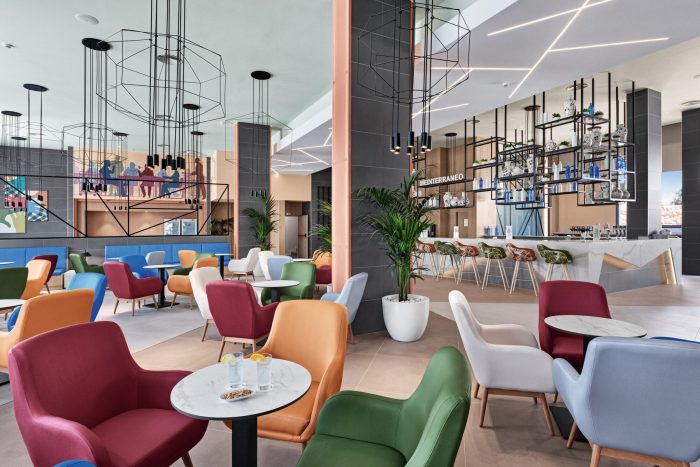 It was in the 1980s that the RIU chain began its expansion outside the Balearic archipelago, and it did this in the Canary Islands. It was in 1985 when it opened its first hotel on the island of Gran Canaria: the Riu Palmeras. This iconic hotel is now in the Palace category after having been completely refurbished in 2019, offering guests an extra touch of luxury during their stay. And it also has All Inclusive 24h service! 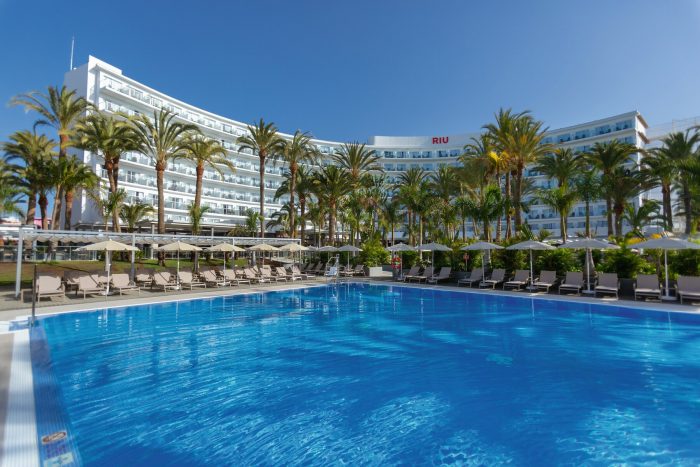 It was their first experience outside the Balearic Islands and at the time it was an enormous challenge, which turned out to be a great success! RIU currently has 12 hotels spread between Fuerteventura (4), Gran Canaria (7) and Lanzarote (1).

The chain was growing and expanding across the map. It was in the early 1990s when the company decided to explore other parts of the world map, opening its first hotel in Punta Cana: the Riu Taino, in 1991. We can say that this hotel marked a watershed in RIU’s history, as it was the beginning of the company’s expansion into the Americas, where it currently has more than 40 hotels. 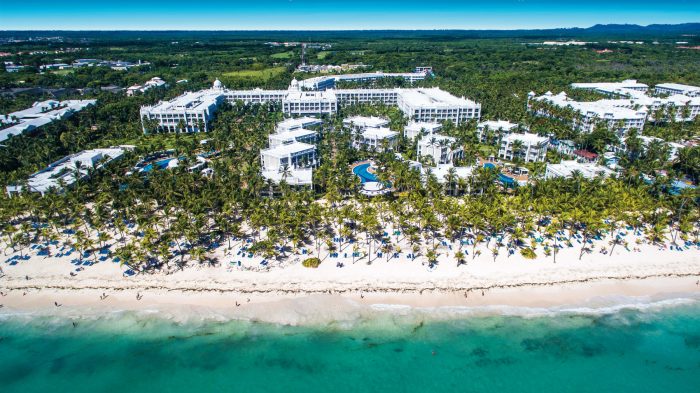 In just Punta Cana, in the Dominican Republic, RIU operates six hotels: the Riu Bambu, Riu Naiboa, Riu Palace Bavaro, Riu Palace Macao, Riu Palace Punta Cana and Riu Republica. It is actually in this destination where the chain has one of its most popular services and venues for the whole family: Splash Water World! This experience, shared by the 5 hotels located in the Dominican Republic complex, was also a RIU first. Later the Riu Republica, a hotel outside the resort, would open its own Splash! 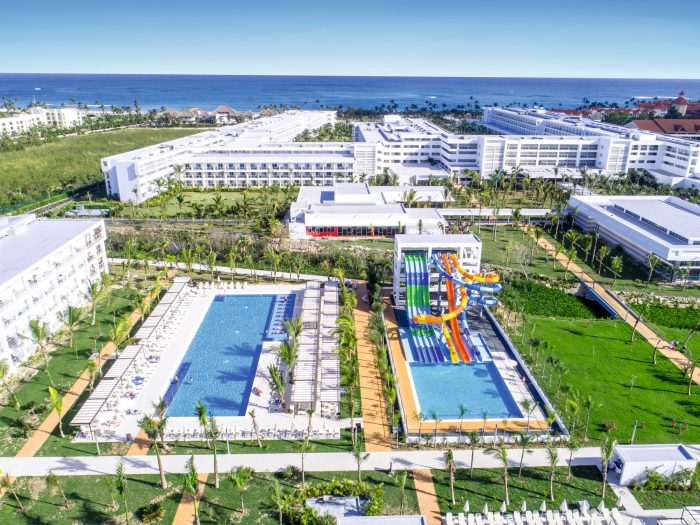 Without leaving the Americas, we move on to Mexico, a destination where RIU currently has 20 hotels. The Riu Yucatan, in Playa del Carmen, was the first hotel RIU opened in this country, in 1997. Located in the renowned Playacar complex and renovated in 2013, its opening was the chain’s first venture into a country where today, almost 25 years later, it now boasts a total of 12 hotels along the Mexican Caribbean: six hotels in Playa del Carmen; four in Cancún; and another two in Costa Mujeres. In the Pacific area, RIU operates in Los Cabos, with three hotels; in Riviera Nayarit, with three hotels; and one in Mazatlán. In addition, the chain opened its first Mexican urban hotel, in one of the country’s largest cities: Guadalajara. 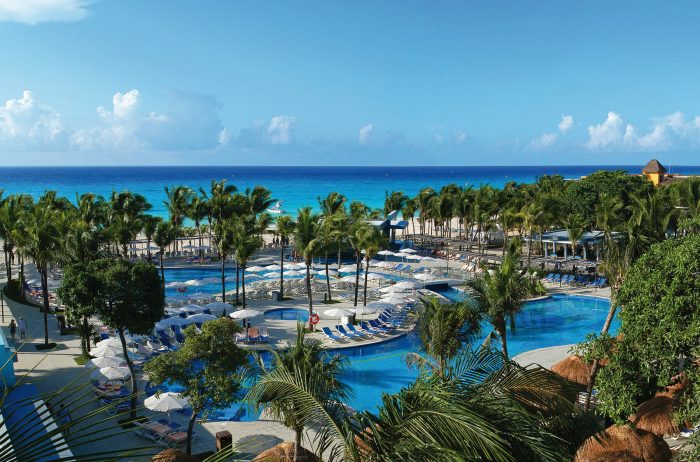 It was in 2010 when the RIU chain undertook one of its most complex projects to date: its first city hotel. The launch of the Riu Plaza Panama was RIU’s first step in the Riu Plaza line of hotels with which it entered the most unknown terrain to date: the city. Up to this point, the chain had been focused solely on beach hotels and now it needed to adapt its product to the urban arena. It was so successful that in 2016 we arrived in the Big Apple with the Riu Plaza New York Times Square hotel, just a few minutes from the famous Times Square area. This hotel would be one of the biggest projects in the Riu Plaza line. The chain currently has 9 Plaza hotels located in the centres of various key cities around the world. 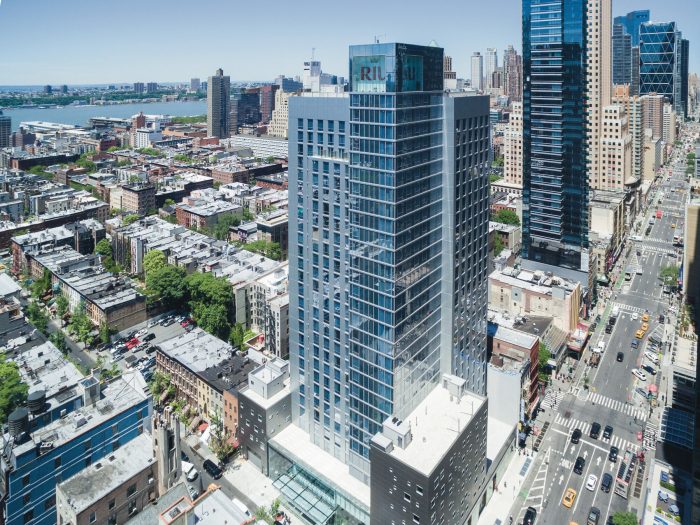 After establishing itself in major destinations such as the USA and Mexico, in 2016 the chain managed to touch down in Asia for the first time, specifically in Sri Lanka, with the Riu Sri Lanka. This is one of the destinations that, until that point, had been among the most enigmatic for the chain, but it is a place to which it has succeeded in applying its business model. So much so that RIU has continued with its project on this continent by opening two hotels in the Maldives in 2019: the Riu Atoll and the Riu Palace Maldives. And at the end of 2020, together with its partner Nakheel, the company launched its latest major project: the Riu Dubai Hotel. Located in the Deira Islands, it is the first 24h All Inclusive resort in the area. 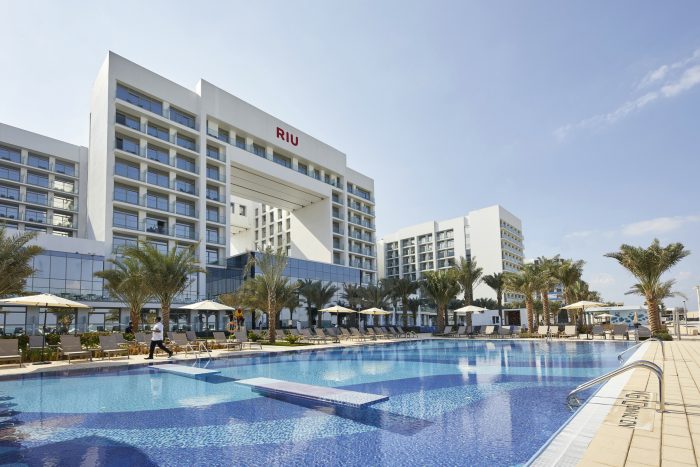 These are just a small sample of RIU’s firsts in some of our destinations. However, there are many first hotels and stories that have come with their openings. As we said at the beginning of the post, each new destination is a tremendous challenge and a new experience to add to the history of the chain. Thank you very much for making it possible and for helping us to travel the world.

We hope to continue to see you crossing off the places you have visited on the world map, just as we will, and keep adding dream trips to your bucket list.

RIU and its new training concept

RIU shows you the before and after of Riu Palace Maspalomas