Many of the most important things in life happen without much planning. Sometimes we make pivotal decisions because we get carried away by the situation and follow our intuition. That is exactly what happened with the hotel Riu Plaza España. My sister, Carmen, and I decided to buy the Edificio España in just over an hour. What came afterwards involved a lot of hard work and sacrifice, but above all an amazing sense of satisfaction. 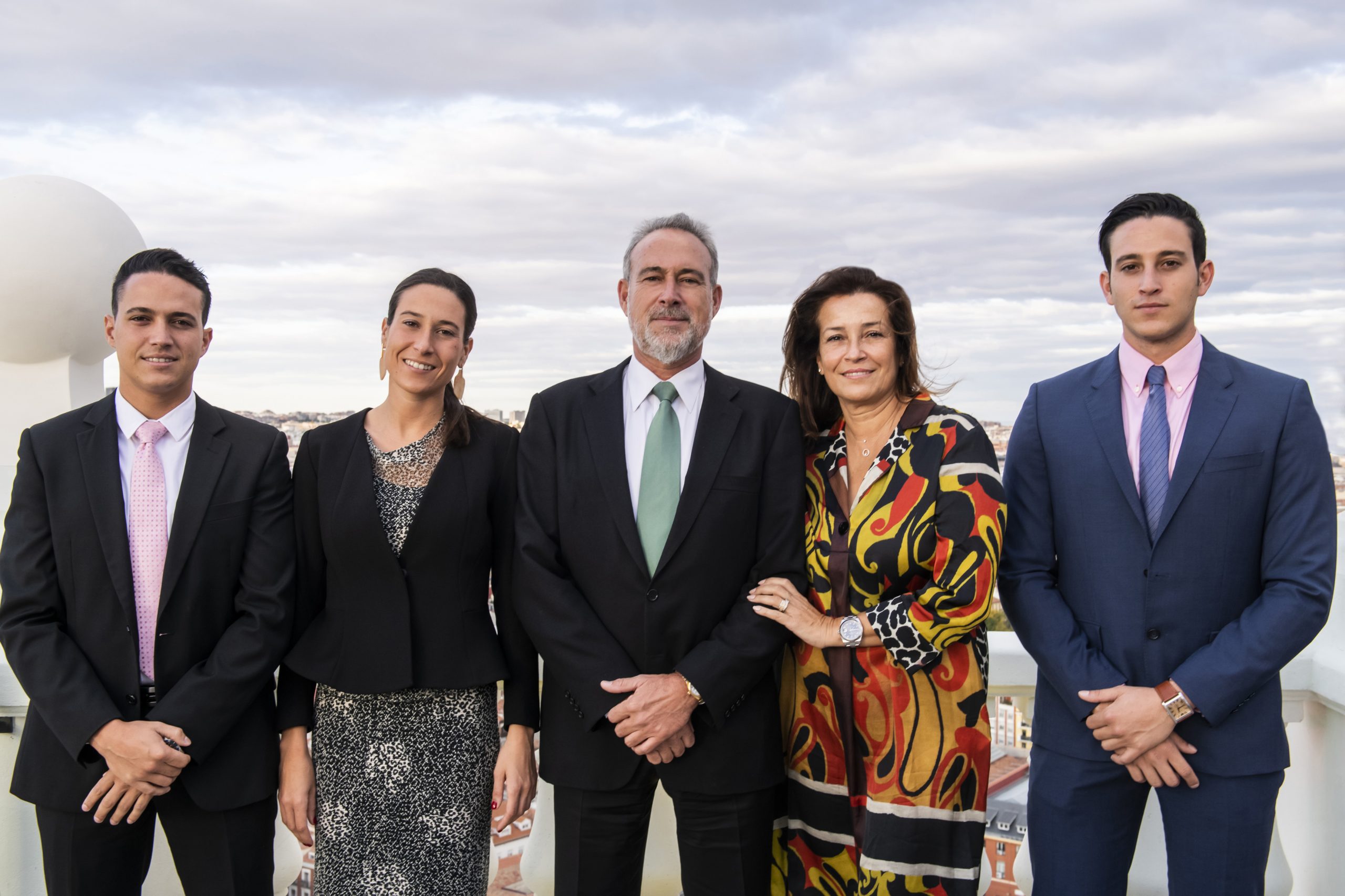 Luis Riu, in the middle, with his wife, Isabel, and his children Luis, Naomi and Roberto Riu, at the opening of the Riu Plaza España

Today I want to tell you all the details of this operation, which resulted in us having one of the most emblematic hotels in Madrid. The hotel Riu Plaza España took RIU’s brand awareness to levels that we had never seen before in our country. We are very proud, but it is also a great responsibility. In many ways it was our most ambitious project, but it was worth all the effort.

Riu Plaza España, a project to rescue an emblematic building in Madrid

When the proposal to invest in Madrid landed on my desk, we weren’t actively looking for projects in this city. We had recently lost the chance to invest in Barcelona, in a hotel with an excellent location between the Paseo de Gracia and Plaza de Cataluña. It was 2013 and I was really interested in that project. We submitted a good offer, but we had already been warned that our competition was another very powerful investor. In the end, our offer didn’t win the auction. We later found out that it was none other than Amancio Ortega that had bought the building through his management team Ponteageda, and the hotel was subsequently managed by another Majorcan hotel company.

So when our director of Expansion proposed visiting two buildings, we didn’t have very high expectations when we went to Madrid. The first building we visited was “La Imprenta” on the Cuesta de San Vicente, and from there we walked to Plaza de España. When I saw the imposing Edificio España, it brought back memories of trips to Madrid with my parents in the 60s. When I was little, the Edificio España was still one of the tallest buildings in the country. I remember how I was taken aback by its symmetry, harmony and sheer size. When we went inside, it was really impressive to see it completely empty, like a haunted house. I’d even go as far as saying it was scary. But when we went up to the rooftop terrace it was clear that, with its privileged views, this was the most emblematic building in the city. During this visit, the offer on the table was to manage the hotel that was going to be built occupying 50% of the building, and I got behind it right from the start. 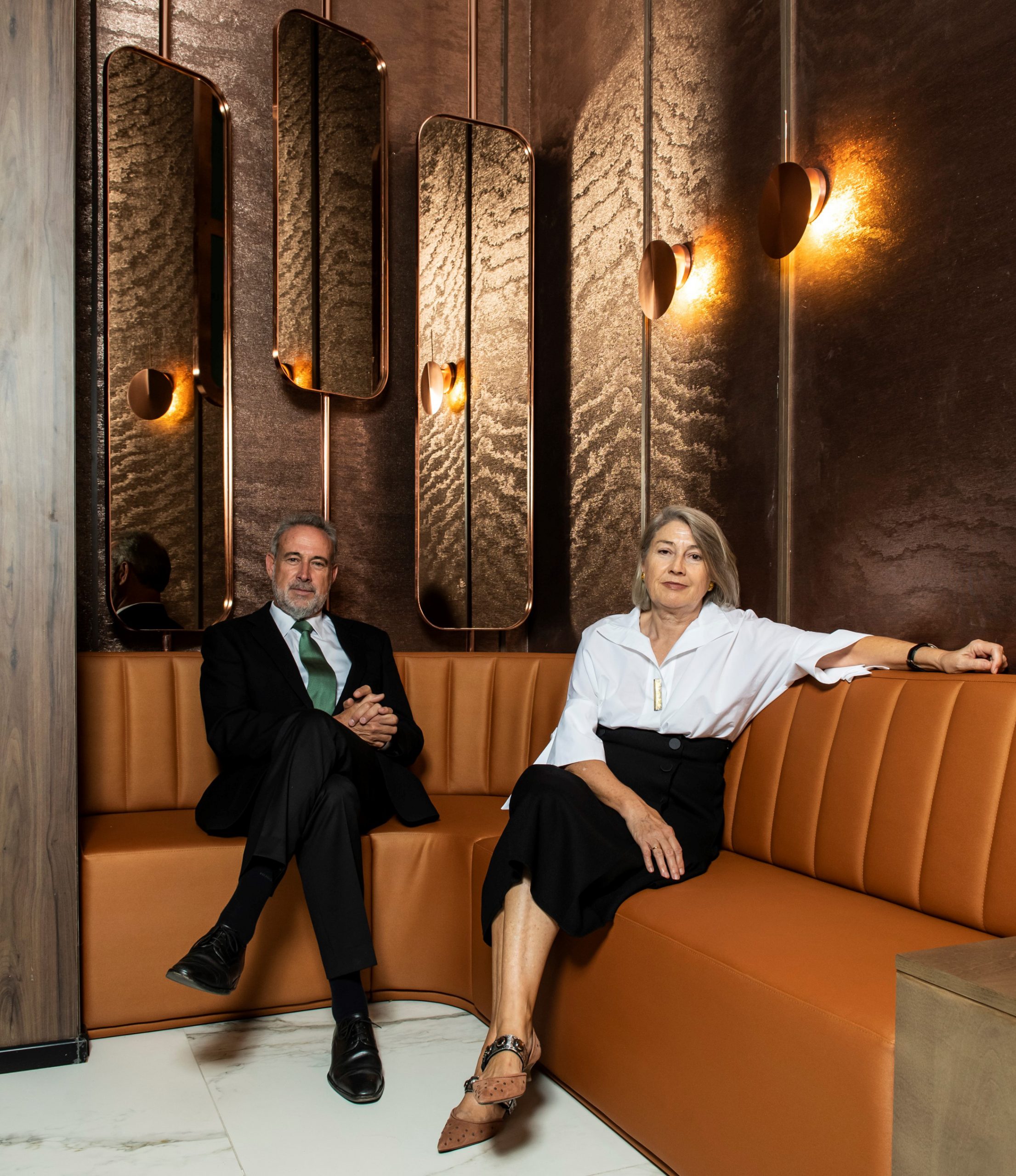 Carmen and Luis Riu, owners of RIU Hotels & Resorts, at the opening of the Riu Plaza España

However, the process evolved. From managing the hotel we went to being investment partners, and just a few days before Grupo Baraka’s right to purchase the building from the then owner Wanda expired, we faced the dilemma of whether to buy 100% of the Edificio España or miss out on this opportunity. That’s when Carmen Riu and I acted fast and took a risk.

After we signed the deal, we had to face months of lawsuits and a lot of media attention. As we had always kept a low, serious profile as both a family and company this situation was quite uncomfortable for us, but we were safe in the knowledge that we had done everything right, with the corresponding professionalism and advice. We devoted ourselves to getting the project off the ground so we could open our hotel Riu Plaza as soon as possible.

Even so, and despite the fact that it was a thing of the past and time heals all wounds, it was very hard when people called the safety of the Edificio into question, especially for our head architect, Paco Hernanz. He bore the brunt of the attacks on the project. It was a surreal public trial where people that had no technical expertise questioned the safety of the structure, to the point where the project was subject to daily on-site surveillance. This made everything much more stressful. I remember that Paco even slept at the office some days when he stayed late reviewing documentation or preparing reports. It was an unforgivable waste of such a talented person’s time and effort. 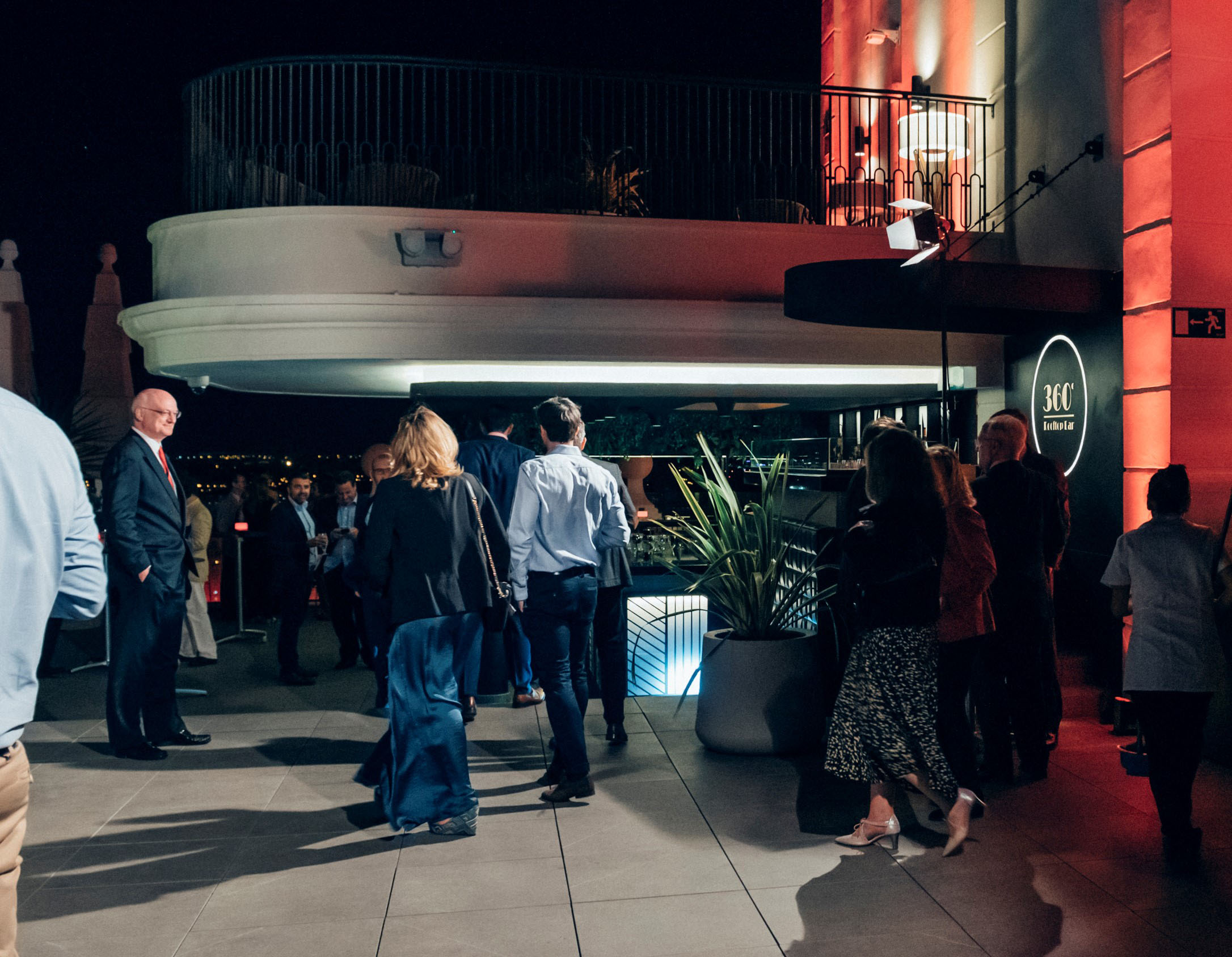 Paco Hernanz, RIU’s chief architect, at the opening of the Riu Plaza España

This was the most important project for many collaborators, whether from RIU, engineering consultancies such as Indagsa or Arditecnica, or other external companies. I would even go as far as saying that the technicians from the Town Hall of Madrid, who were always supportive, got excited about it. For Paco Hernanz, who passed away in May 2020 from COVID-19, I think this was the most important project of his career. He was so enthusiastic right from the get-go. As he was born and bred in Madrid, he said it was an honour to be at the helm of the refurbishment that was going to bring the Edificio España back to life. Even though he didn’t often attend events, he was full of excitement at the inauguration party in September 2019. I can still picture him talking to everyone and telling them all the details and anecdotes, and, of course, making everyone laugh with his serious style without even trying.

His closest collaborator, Víctor Martín, recently reminded us how Paco got so involved in the initial distribution of space, when defining the number of rooms and distribution of services, or how he used his journey home (he walked to and from work) to talk about what had happened that day with Cristina Bermejo or Faustino Rodríguez, the chain’s architect and technical architect, who were our eyes in the Edificio.

Respect for heritage and a grand terrace, key ingredients of the Riu Plaza España 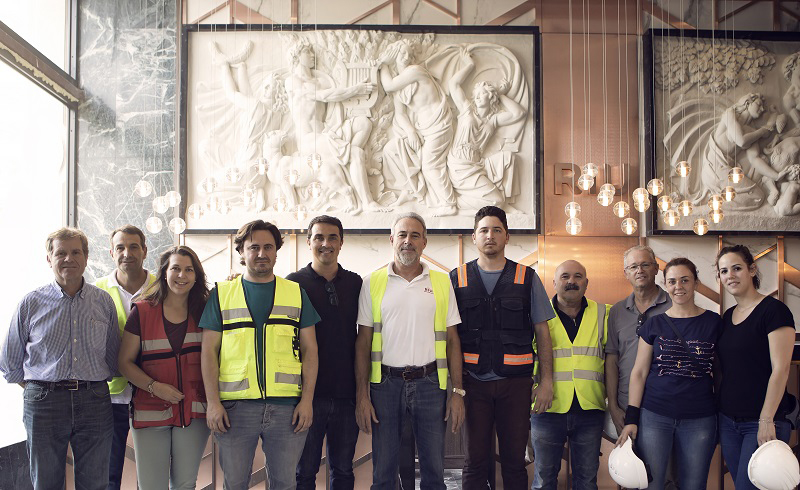 Luis Riu, with some members of the team involved in the Riu Plaza España construction work at the reception area

We have always been sure about the product’s key elements:

The construction, as with all buildings that have already been constructed, there were lots of hurdles and unforeseen circumstances, but even more in this case. It was a huge challenge, a project that made you feel a bit dizzy. I will never forget what the inside of the building looked like when it was totally empty, when you could see all the columns and there was nothing between floors -2 and +2. It was rather impressive. It looked like a skeleton. However, once we had completed the whole process, including the most visually striking part of the interior design carried out by ADG, the result was absolutely spectacular. 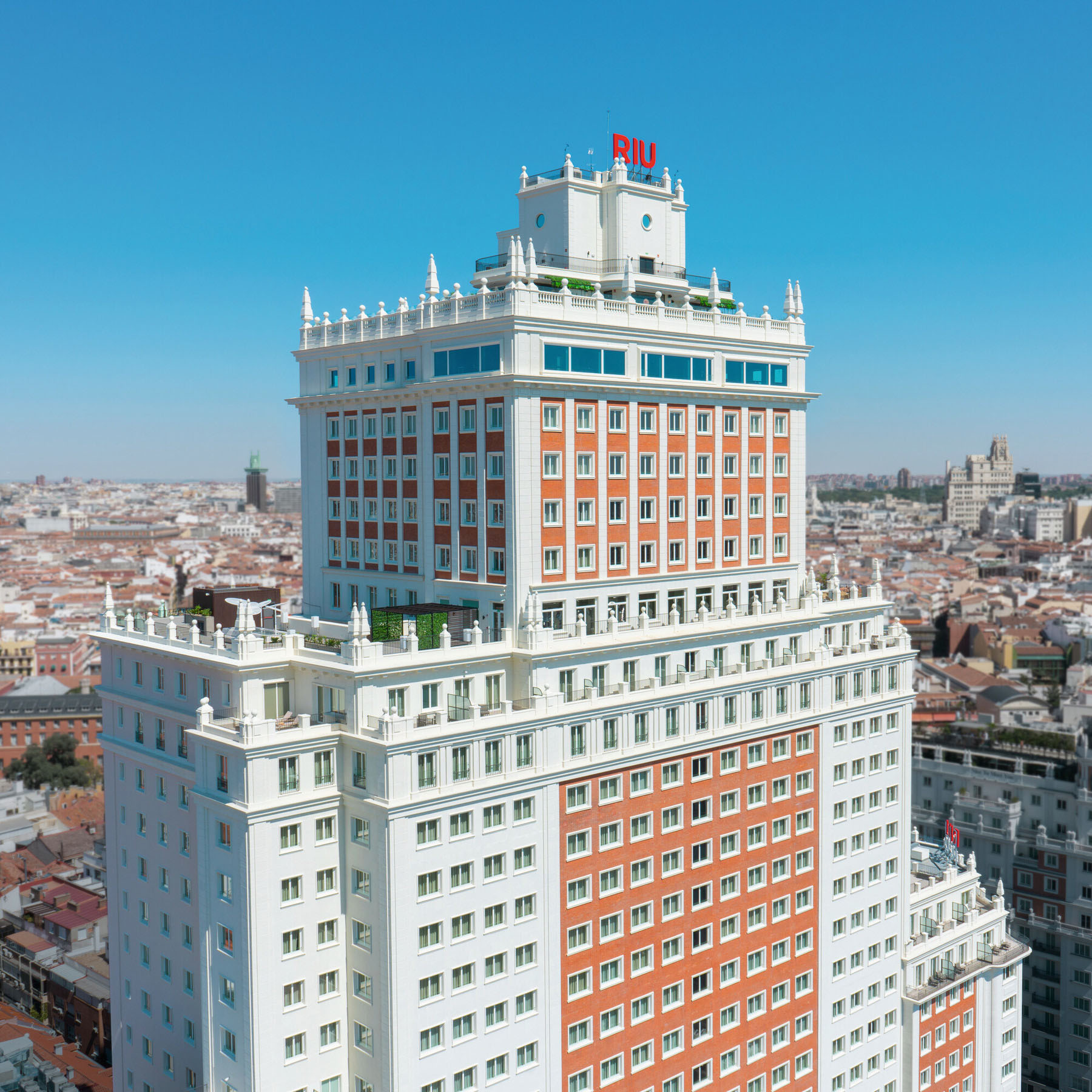 Facade of the Riu Plaza España, a presrved architectural element of the original building

Today I’m so proud when I see RIU’s name on top of the hotel, right in the heart of the city. They say that everyone in Madrid has a memory involving the Edificio España. Maybe they took a class there, hired a car, celebrated their communion or had their wedding photos taken against the backdrop of the Edificio España. It is part of the city once again and has become one of its best-know icons. In fact, it appears in some videos as one of Madrid’s “must-sees”. 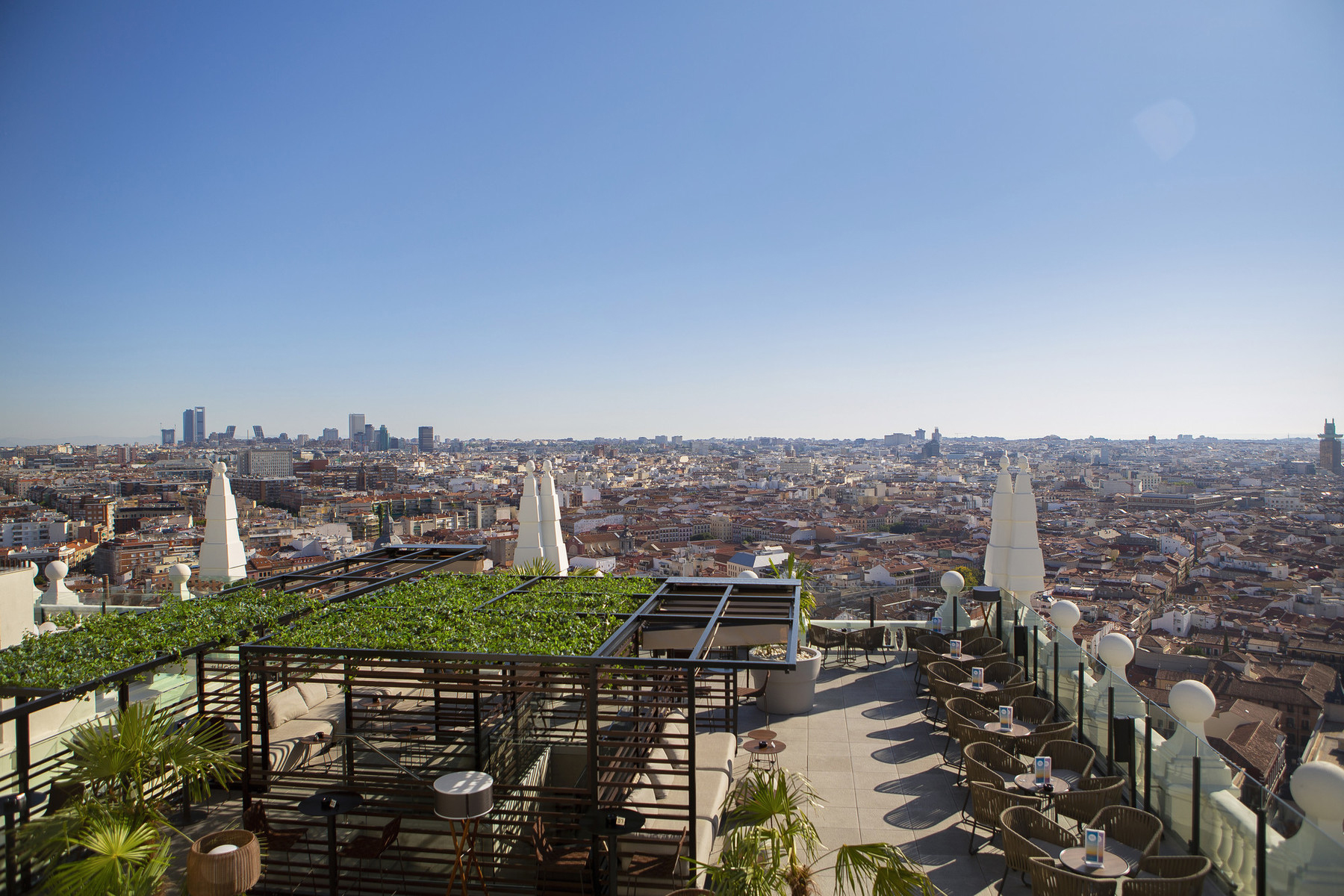 Terrace 360 of the Riu Plaza España, one of Madrid’s tourist attractions

This building has a special kind of magnetism. The first weeks were crazy. The queue to go up to the terrace were endless. To tell the truth, this success exceeded all our expectations. The 360° rooftop bar ran out of water and tonic water on many nights. There was no way we could prevent this from happening because we didn’t have adequate space to store enough drinks to meet demand. We learned a lot and faced many challenges on this journey, and we overcame them day after day thanks to the hard work of our team, which has been led by Manel Jaile since day one.

Riu Plaza España: a meeting point for the entire city 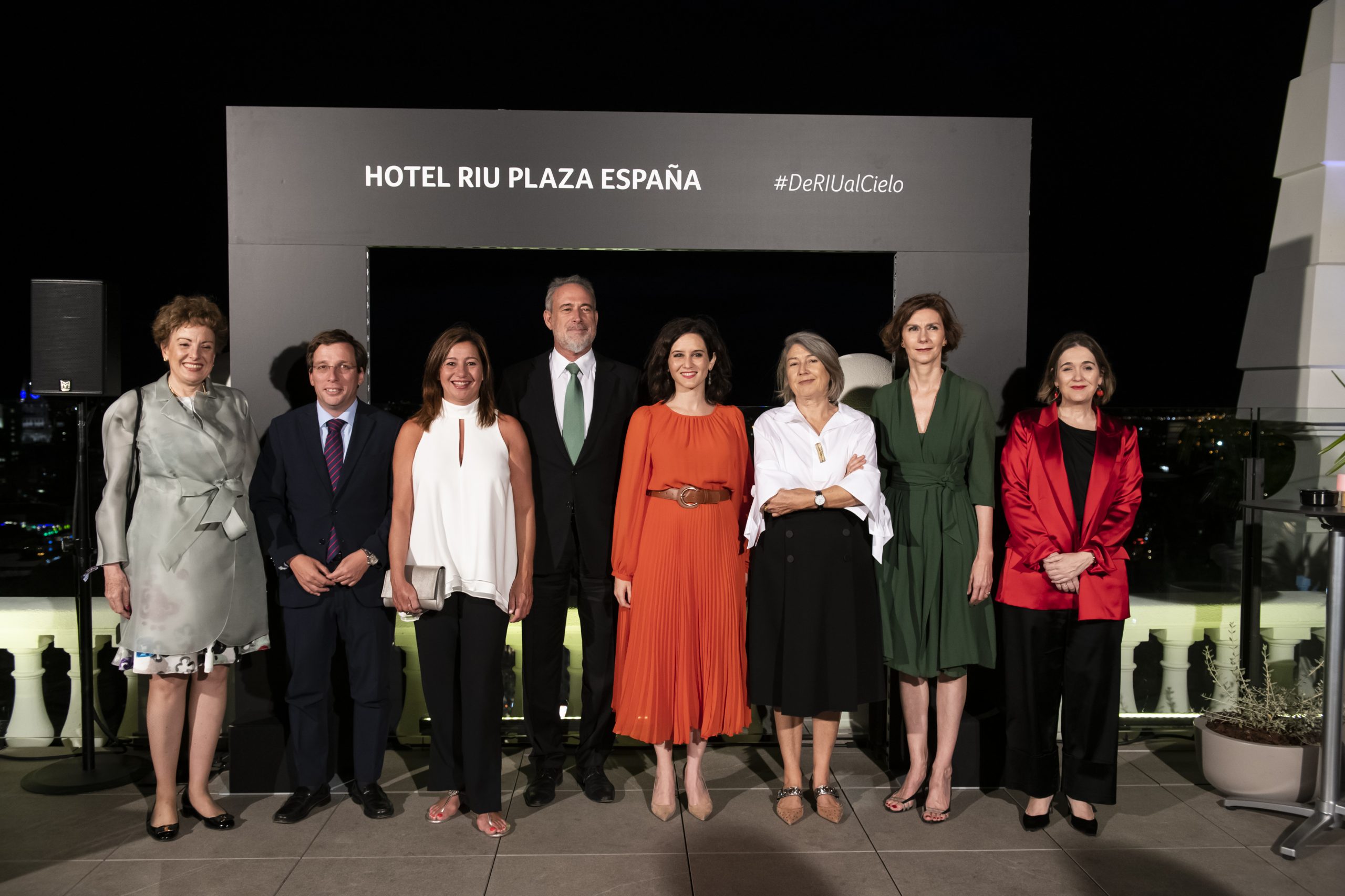 Expectations were high, we felt like all of the city’s eyes were on us and we are so pleased we didn’t disappoint them. The inauguration party was a great success and we welcomed all of the municipal and regional authorities. Even the president of the Balearic Islands attended the event. The articles published in the first weeks were very, very positive. Since then, the popularity of the hotel and its terrace have not stopped growing. We have been visited by writers, journalists, singers, actors and politicians. In November 2020, it was the stage of José Luis Perales’s spectacular performance at the Latin Grammys, with Gran Vía and the Royal Palace lit up in the background. It was also chosen as the location for one of Spanish rapper C. Tangana’s music videos, and Netflix has filmed world-famous scenes from series like Elite and Valeria on our terrace. 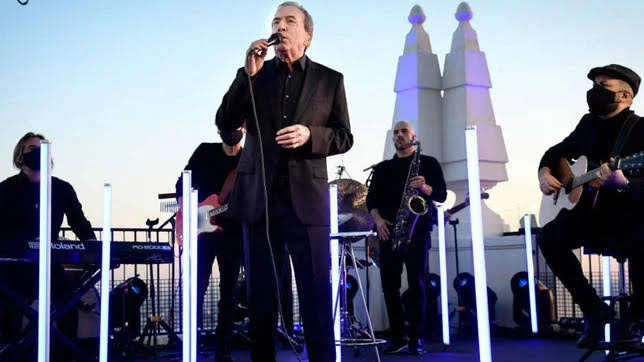 The hotel is unstoppable. People want to celebrate all kinds of events in the hotel’s rooms, it has become a destination in itself for people from Madrid looking for a weekend getaway, and the terrace is the place to be. This has all been possible thanks to the amazing Sales and Operations team, which works behind the scenes to make everything run like clockwork without customers even realising.

But we’re not just going to sit back and watch how well everything is going. We are going to keep getting better, surprising our customers and offering new attractions so they keep coming back. The next surprise will be on the terrace, with a new vertigo-inducing section where you can take a souvenir photo. There will also be changes in the De Madrid al Cielo bar to improve access to the rooftop and make the most of this privileged location on the 26th floor. And you won’t have to wait very long at all!

Meanwhile, Inditex is working with Inbest on the project to reform the commercial floors, which will soon be home to Europe’s largest Zara store. At the same time, the city is making progress on the renovation of Plaza de España and we hope it will be inaugurated very soon. We hope that all of these projects will bring this area of the city back to life and expand Gran Vía past the corner of Plaza de España and Calle de los Reyes.

The hotel Riu Plaza España’s contribution to our brand awareness and prestige is incalculable. This project has had an enormous impact on our sales for all destinations in Spain. The day that we bought the Edificio España marked the beginning of an adventure that has had a more than happy ending.

Cindy Varguez: “The Call Centre is the first contact our clients have with RIU”

The RIU Entertainment team challenges you to Kahoot