It’s been 20 years since we opened our first RIU hotel in Jamaica. This has been a success story and, looking back, one of the investments that has brought me the most satisfaction, both personally and in terms of business. For many reasons. It has taken us 20 years to really get to know the country, love all its qualities and form long and deep business relationships. But it also served as a reaffirmation of our business model and our vision of the industry. Furthermore, this heavenly island has become part of the history of my family, because I have a close friend and colleague heading Operations in the country, Alejandro Sánchez, and also because it served as a training ground for my two sons, Luis and Roberto. 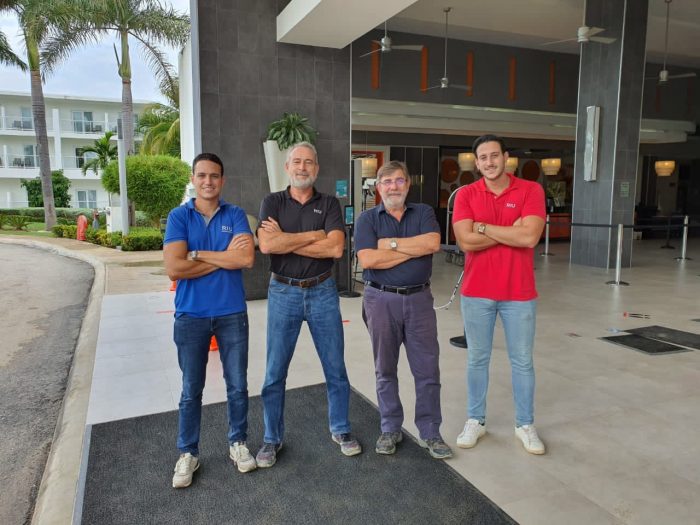 Luis Riu, CEO of RIU Hotels & Resorts, with his sons Luis and Roberto, as well as the head of RIU Operations in Jamaica, Alejandro Sánchez

Jamaica, a pioneering destination of the ‘All-Inclusive’ concept in the 90s

I visited Jamaica for the first time in 1995. There, we encountered an All-Inclusive product that, at the time, was known in very few places in the world. We were very interested in finding out what it was, what it included, how much they charged… we were studying the idea of introducing it at the Riu Merengue (Puerta Plata, Dominican Republic), the hotel that, in 1996, became the first RIU All-Inclusive.

That trip, besides serving to help me understand how RIU could adapt the model, convinced me that Jamaica would be a future RIU destination. It’s interesting to see how well established the All-Inclusive model is today, and how we have made it a key to the success of our service, considering the misgivings it inspired initially. It was difficult to understand that everything was included in one price and that the bars and restaurants would no longer be an important source of additional revenue.

In those years, we were focused on the Dominican Republic and Mexico, and it wasn’t until 1999 that I could return to make my vision for Jamaica a reality. I landed in Montego Bay, rented a car and set off on a journey to the east, touring the entire coastline to see all its towns and beaches. 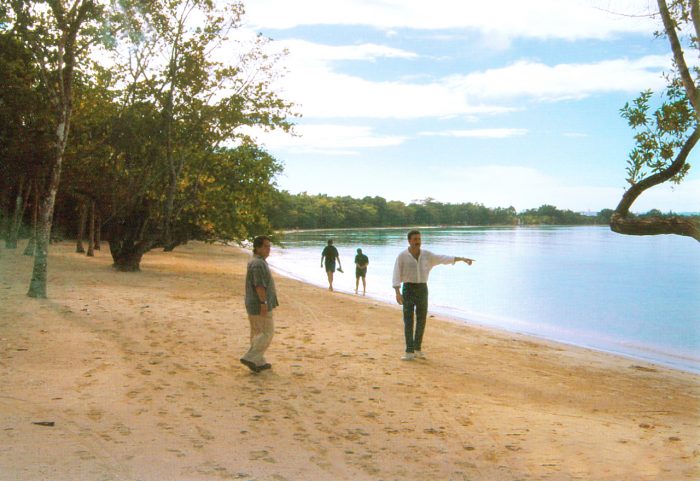 Luis Riu, during his visit to the Negril area, in Jamaica, 2003

It took me two full days, and it turned out that the best part came almost at the end of my tour of the island. Negril offered one of the best beaches I have ever seen in the Caribbean, and I decided then and there that it would be our first destination in Jamaica. The road wasn’t easy. My project faced great scepticism because the country projected an image of lack of security that frightened tour operators. In fact, the Riu Tropical Bay was an investment of the RIU family because our partner, TUI, preferred to not take part in this first adventure.

A project RIU used to attract European tourists to Jamaica

Jamaica has it all. At least the main points I consider essential for a successful tourist destination: beautiful beaches, good weather, and some cultural aspect that attracts visitors. This can be gastronomy, heritage, a distinctive style of music, etc. Reggae is known worldwide and instantly conjures up the idea of relaxation. It invites people to be on a beach, enjoying the breeze, to the beat of this music. And its people have a special charisma. A way of being that is charming without being invasive. And while this is less romantic, the distance by car from the airport is very important, and I consider 1.5 hours as the ideal maximum. 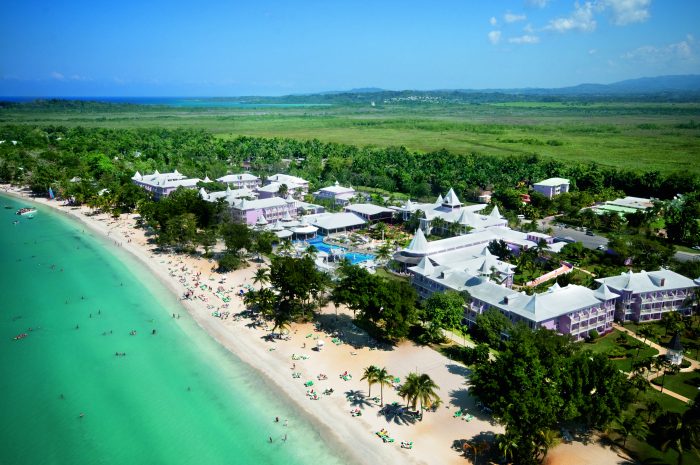 And I didn’t get it wrong. The hotel opened in February of 2001 and was an immediate success. And this was true for markets that were new for the country. Jamaica used to be a destination mainly for North Americans, and the hotel rates were prohibitive for the vast majority. With our arrival, many Europeans started to visit Jamaica. The destination was a surprising success in Spain. There had been demand for Jamaica, but it wasn’t until we arrived that people had the confidence, and also the price, that a Spanish company could offer them.  Today, our hotels attract mainly British guests, followed by German, Spanish and Portuguese, and, of course, also Canadian and American.

The demand was such that, very shortly afterwards, I was already looking for land to build a second hotel. At that moment, I ran up against the mistrust of local business people, who did not view the arrival of our competition favourably. The president of the country at the time, Mr P. J. Patterson, called me and asked me to tell him who we were and what we wanted to do. I explained our history to him and told him that there was a good chance that all the other major Spanish international chains would start arriving shortly after RIU, because that’s what had happened in other destinations. And that this was going to help Jamaica position itself as a leading destination in the Caribbean. 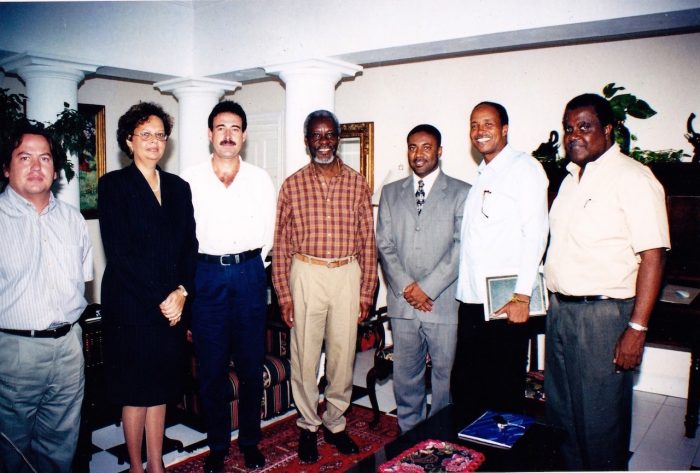 Meeting between Luis Riu and PJ Patterson, the Jamaican president

He liked our vision, believed my prediction and gave the green light to the purchase of the land we wanted, which belonged to the state urban development company. Seven years later, Mr Patterson visited Mallorca and told me that everything had turned out as we said at that moment. I’m glad to know that he didn’t regret placing his trust in me.

RIU and Jamaica: a success story that reaches its 20th anniversary

A total of six hotels, in three destinations which together represent 3,340 rooms. And we have also opted for major renovations. The Riu Tropical Bay became a Riu Palace after its renovation in 2018, while the Riu Ocho Rios opened the new Splash Water Park last year after its complete renovation. Our accumulated investment in Jamaica now totals $750 million. It’s unquestionably one of our main destinations in the Caribbean, along with Dominicana and the Caribbean coast of Mexico, and I see the potential for us to continue growing. 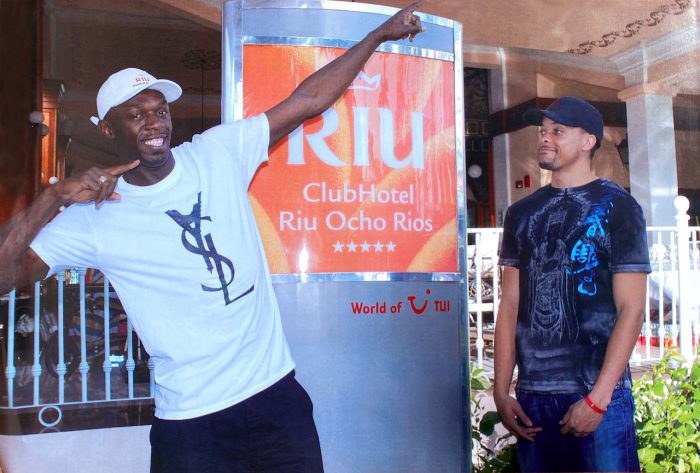 One of the major advantages I have in Jamaica is that I have a great professional at the helm, a man who is also a good friend. Alejandro Sánchez is the Director of Regional Operations for the English-speaking Caribbean and the United States. He has many, many years of experience in the sector and in the company. He started to work at the Riu Caballero hotel in Palma in 1974!  He left the Canary Islands to take charge of the English-speaking Caribbean because, when we opened the Riu Ocho Rios hotel, I decided that Jamaica needed separate management from Mexico and the rest of the Caribbean. So, Rafael Expósito handed him the reins, and Alejandro Sánchez started to manage Jamaica, as well as the hotels in Florida and Bahamas. 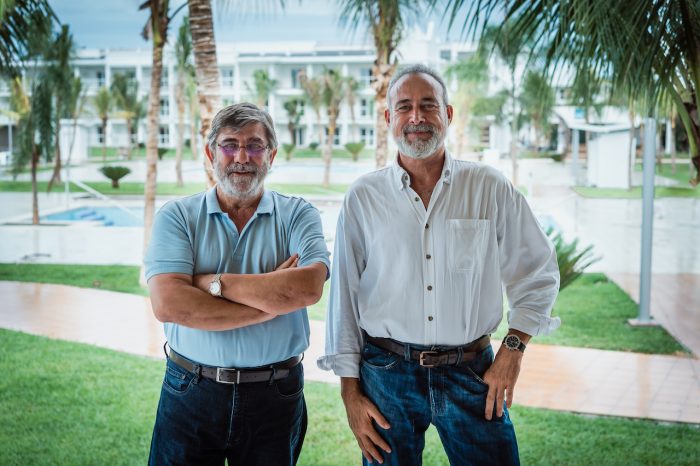 Luis Riu, the CEO of Riu Hotels & Resorts, with Alejandro Sánchez, head of Operations in the English-speaking Caribbean

And it was an excellent decision. Alejandro has a very warm and open personality that is perfect for the Anglo-Saxon world. Wherever he goes, he greets the entire staff with open arms. They aren’t accustomed to seeing a senior executive this accessible and open to helping. And that disarms them and turns them into very loyal collaborators. Managing people is very difficult, managing people from different cultures is even more difficult, winning over all of them without exception is Alejandro’s talent. 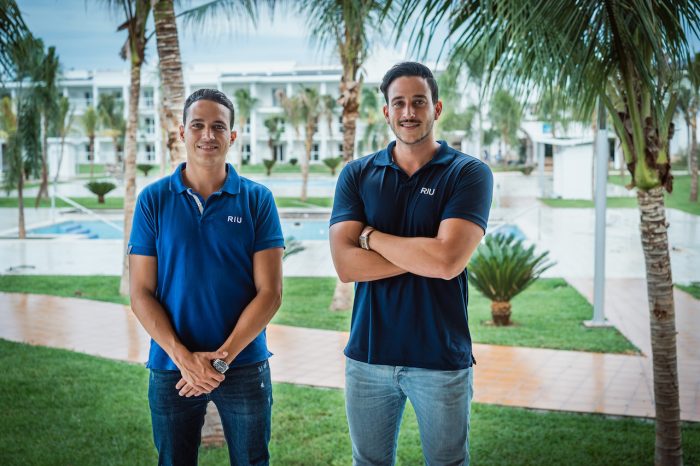 My sons, a part of the fourth generation of the RIU family, agree with me, and the two of them have worked closely with him, as well as with Frank Sondern, our representative in the area. Both Luis and Roberto Riu received their training on operations in Jamaica. In fact, they consider Alejandro their best mentor for all they learned in that period, in which they also visited the hotels in Bahamas and the United States.

My son Luis Riu did his training in 2017 at the Riu Reggae hotel, and my other son, Roberto, the following year, at the Riu Palace Jamaica. “It’s a complicated destination for expatriates. They all want to go to Mexico or Punta Cana for the language and the social life, because it’s easier to adapt there. I think that our father wanted to set an example by choosing the destination”. That’s what my son Luis says, but both agree that they have wonderful memories of their time in Jamaica, “especially because all the expatriates form a big family. It happens in all destinations, but in Jamaica I think that it’s accentuated, and we truly felt very close”, says Roberto. Both still have friendships from their time in Jamaica. Moreover, they learned a great deal, among other things, to deeply appreciate the country. 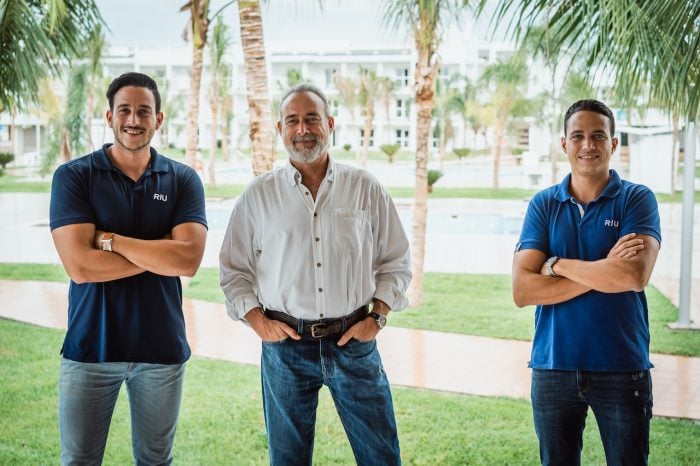 RIU celebrates the 20th anniversary of their landing in Jamaica

We have celebrated the 20th anniversary of our presence in Jamaica with the reopening of the Riu Montego Bay after its major renovation, one of the sweetest news we have in RIU’s plans for 2021.  The work took place right in the middle of the explosion of the COVID-19 crisis, and the border closure caught the team working at the hotel by surprise. They were stranded there for six months without even being able to visit their families, in addition to all the restrictions at the local level, curfews and other limitations. Which meant that they didn’t have options for unwinding after work either. That’s why, from here, I want to sincerely thank them for the tremendous effort they made, and I want them to know that I’m aware that this work has been even more difficult than under normal circumstances. 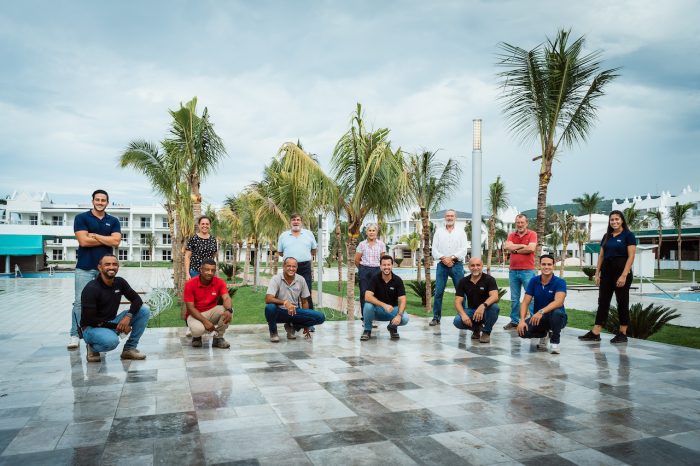 Luis Riu, with the team in charge of the refurbishment works of the Riu Montego Bay in Jamaica

Nowadays, Jamaica is opening up to tourism little by little. Each week we see an increase in arrivals of guests from the United States, which is the market in the best position to travel. And that has encouraged us to schedule the reopening of the Riu Reggae and the Riu Palace Tropical Bay for the 1st of May. We will have to wait a little longer to get back to welcoming our European customers. The vaccine is the key, and the progress of vaccination, slow. As I always say around here, the reactivation, no matter the destination or market, will find us working.

Share the post "Luis Riu: “Jamaica is one of the destinations that has brought me the most satisfaction, both personally and professionally”"