It’s Christmastime, and, as usual, Berlin has dressed up dazzlingly for the occasion. Every year, this unique atmosphere magically attracts visitors from all over the world. I, too, love this time of year, which is why, as a local Berliner, nothing can keep me away during Advent. I love staying in the city, strolling through the brightly lit streets, browsing for gifts in spruced-up shops, and meeting friends for mulled wine at the Christmas market.

And Berlin has plenty of Christmas markets. I’m constantly asked which the best is. And it’s not an easy question to answer, because, like Berlin itself, they vary greatly, and are all unique in their own way. The Christmas market at the Gendarmenmarkt is a must for me every year, because it exudes a very special, romantic vibe thanks to the artists, acrobats, dance groups, choirs and jugglers on stage, the wood carvers, metalworkers, tailors and jewellers in the artisans’ tent, and of course the magical historic backdrop of the Konzerthaus, Deutscher Dom and Französicher Dom buildings. U-Bahn (metro) line 2 runs directly from Wittenbergplatz station at the Riu Plaza Berlin to the Gendarmenmarkt (Stadtmitte or Hausvogteiplatz stations).

What splendour! Fairy lights on 650 trees and illuminated Santas, nutcrackers and reindeers spectacularly light up the Tauentzien, with the exclusive KaDeWe department store, and Ku’damm shopping streets not far from the Riu Plaza Berlin. The fairy lights are said to stretch for 230 kilometres. And the Christmas market around the Kaiser Wilhelm Memorial Church is once again open this year. Burning at its centre are candles to remember the victims of last year’s attack. This deep wound is yet to heal, and I have a hard job convincing myself that everything is normal as I stroll around the market. So I very pensively saunter past the stands, mulled wine in hand, taking a look inside the legendary Bikinihaus building, admiring the crazy range of designer stores and pop-up booths, and smiling at the monkeys clowning around in the zoo exhibit.

Scandinavian: Christmas market at the Kulturbrauerei complex in Prenzlauer Berg

The Christmas markets in the Altstadt Spandau and at Charlottenburg Palace are of course also full of atmosphere. But to be honest, at Advent, I prefer heading to the smaller markets away from the tourists and big-city hustle and bustle. This most certainly includes the Christmas market at the Kulturbrauerei complex in Berlin’s Prenzlauer Berg district. Whether it’s Finnish glögi (mulled wine), Swedish fire torches, elk goulash or St Lucia, the Queen of Light, herself, there’s a distinctly Scandinavian vibe all around, flanked by some impressive industrial architecture. Because the Kulturbrauerei was a brewery until 1967. The beloved amber fluid was brewed here for over 100 years, and building names such as Flaschenbierabteilung (bottled beer department), Bahnladehalle (train loading hall), Kesselhaus (boiler house) and Maschinenhaus (power house) serve as a reminder of those times to this day. U-Bahn line 2 runs from Wittenbergplatz station at Riu Plaza Berlin, through Alexanderplatz, to Eberswalder Strasse, which is then only a few metres’ walk to the Kulturbrauerei.

At the cradle of Berlin: Fiery winter magic in the Nikolaiviertel

I also enjoy the Christmas market on Sophienstrasse, near the Hackesche Höfe, where you can find organic products, design items and handicrafts all made in Berlin, and in the Nikolaiviertel district, located not far from Berlin’s City Palace, whose reconstruction began in 2013. It is a gigantic structure combining historic and modern architecture, and which will open its doors as the Humboldt Forum in years to come. But the history of the Nikolaiviertel dates back much further than the palace. It is the cradle of Berlin, where the city was founded 780 years ago. There’s a special sense of magic in its tiny alleyways, with their traditional pubs and boutiques, and this has served as the basis for an event organisers call “Feuriger Winterzauber” or “fiery winter magic”. As I stroll down the cobblestone lanes, it’s almost as if I’ve been transported back to old Berlin, expecting every street corner to reveal “Berlin originals” like Schusterjungen (rye bread rolls), the Leierkastenmann (organ grinder) or the Eckensteher Nante (Nante, the Man on the Corner). They unfortunately do not, but I do find Heinz Rühmann in the humorous cult film The Punch Bowl. I treat myself to some hot punch, cuddle up on the open-air couch, and enjoy Advent in the heart of Berlin, yet away from the hustle and bustle of the big smoke. Yes, I absolutely love Christmastime in Berlin! 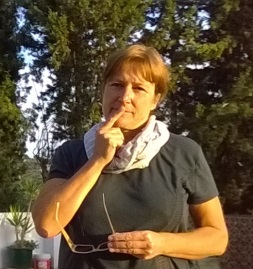 Bärbel Arlt works as a journalist in Berlin and likes to stroll along tourist routes. She would like her experiences and impressions to encourage her readers to discover the world – true to the quote from Confucius: the journey is the destination!