Luis Riu: “Today I am paying tribute to Rafael Expósito, RIU’s longest-serving staff member who has been involved in almost all of the chain’s major milestones”

Rafael Expósito visited Mallorca in February this year. When we met and remembered some the best times we have had together, we had no idea that we were on the cusp of experiencing the deep health and financial crisis caused by COVID-19. Once again, these difficult times have served to help me appreciate the great team we have at RIU. Capable, reliable people are priceless. And there is no doubt that Rafael is one of them. That is why I want to dedicate this post to him today, so that it can act as a small tribute and acknowledgement.

An entire life. Rafael Expósito’s journey in the chain began 49 years ago, in March 1971. He was a boy when he started, arriving in Mallorca at the age of just 14, and he now bears overall responsibility for Mexico, the largest of our destinations outside Spain with 20 hotels and more than 10,000 employees.

But it is not just work. Rafa and I have also shared a great deal more. When hoteliers leave their home and environment, colleagues become more than friends. They are your second family. And that is what has happened to Rafa and me, first in the Canary Islands, then in Punta Cana. Together, we have been through this company’s key milestones, we have shared sweat and pressure, but also a lot of laughter. 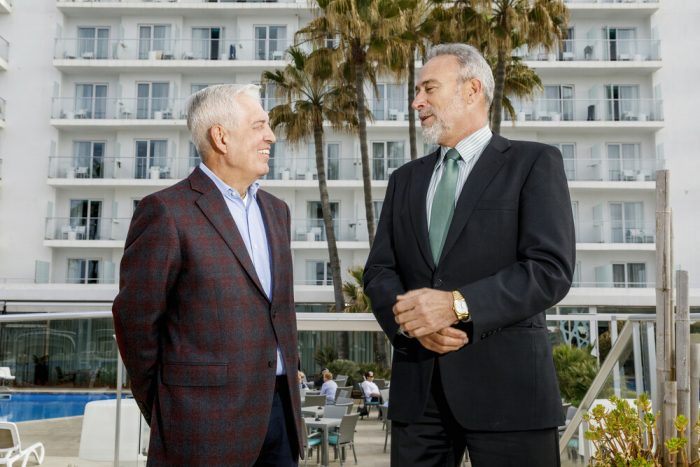 When we met, there was a noticeable age difference. I was 10 years old and scampering about the hotel Riu San Francisco when he first started working there. Today, those four years’ difference are nothing. He came to Mallorca following his father and sister who had left their home town of Jaén, seeking work opportunities. Who knew back then that one day he would be RIU Hotels’ longest-serving employee? 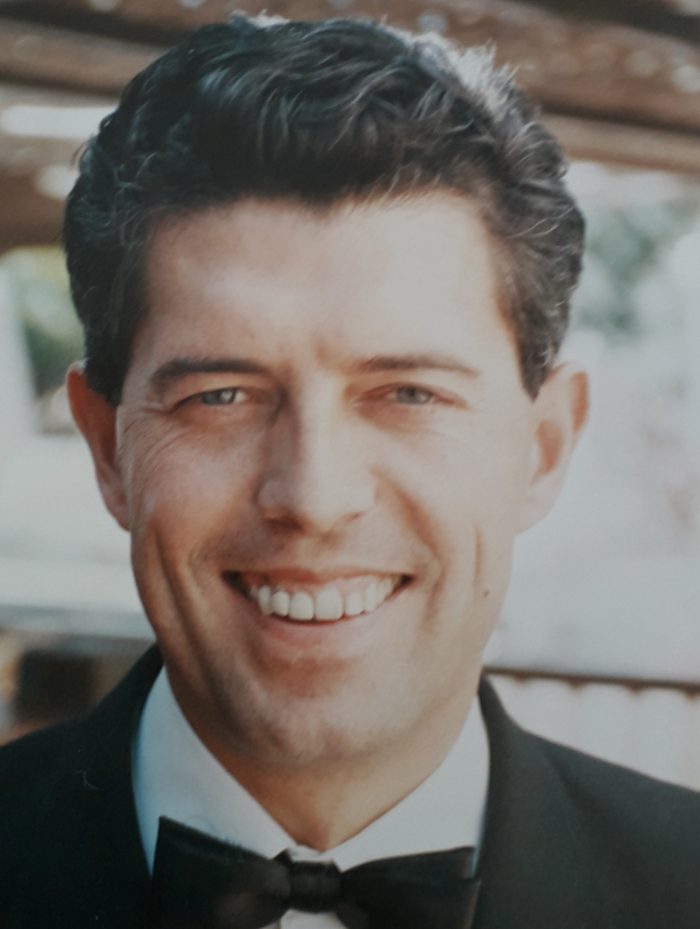 Rafael Expósito, the most senior employee of RIU Hotels & Resorts, in a photograph from 1990From the late 1960s, many trains left the rural parts of Andalusia, full of people seeking work in the cities of Switzerland and Germany, or perhaps a bit closer to home, in Barcelona. Rafael’s father opted for Mallorca because he had a cousin here who assured him that in summer there was enough work for everybody.

“My father came here in 1970 with my older sister, and the following year he brought me too. The plan was to work in the hotel from March to October, then to go home and work the olive harvesting season. But once I had spent my first summer here, I didn’t want to go back. I had to ask my mother for permission in person, and with her blessing and a request to Don Luis Riu Bertrán to ‘take care of the child’, I settled here and never went back to Jaén only to visit.” That is how Rafa recalls his early days, on the latest of his infrequent visits to RIU’s headquarters in Palma. 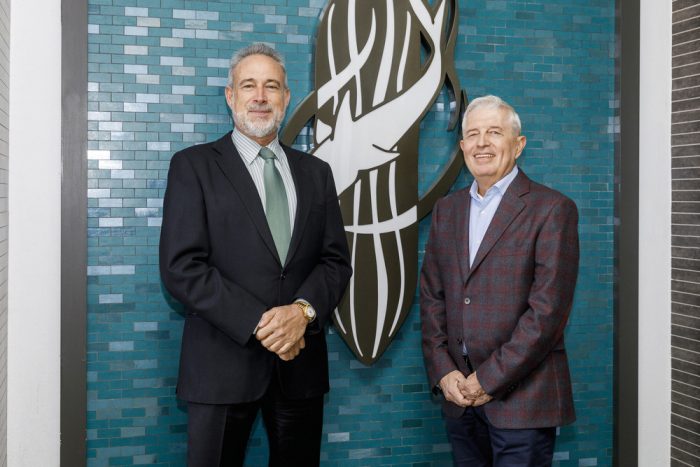 Luis Riu, owner of the RIU hotel chain, and Rafael Expósito, in front of the original symbol of the Riu San Francisco Hotel.

He began washing dishes in Riu San Francisco, and moved through almost all the hotels in Playa de Palma as he progressed from waiter, to head waiter, to maître d’. And so, little by little, with hard work, he rose through the ranks whilst, without realising it, he was witnessed the key milestones that define RIU’s history.

From the Canaries to Punta Cana, the great achievements of the team: Luis Riu & Rafael Expósito

“I remember that the Riu Bravo opening was a watershed moment, because it was the first four-star hotel. That was an important step because we went to the Canary Islands shortly after and made great strides in terms of quality when Riu Papayas and Riu Palmeras opened, shortly followed by the hotel Riu Palace Maspalomas. It was a real milestone to launch that first hotel in the Riu Palace category and to demonstrate that, with our experience, we were capable of making a great leap upwards,” recalls Rafael, who had been at the company for 18 years at that time.

But the time we both remember most fondly is in Punta Cana. You have to work hard to make things turn out well, but you also have to enjoy the process. And we enjoyed ourselves the most in the Dominican Republic. “The thing is, that wasn’t working, that was inventing!”, adds Rafa. “For example, in Riu Taino, our first in the Dominican Republic, we opened the piano bar with the same snack menu we had brought from Riu Palmeras in the Canary Islands. That was a mistake. It wasn’t what customers want from the Caribbean. I suggested opening a fish and seafood restaurant. And Luis said yes, alright, but set it up with what you have and if it works, we’ll take it from there. We made a barbecue with a drum, we borrowed a boat to present the fresh fish… we opened with scant means but a lot of imagination, and by closing time we had sold everything. Of course, soon we were able to open a proper restaurant.” 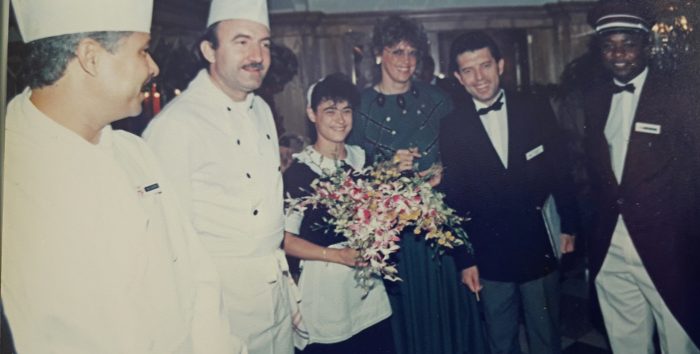 Rafael Expósito, with the team of the Riu Palace Maspalomas Hotel, during his time as maitre in the 90s.

A relationship based on trust

That is where the relationship of trust that joins us was forged. We know one another very well and if just a look is not enough for us to understand each other, we can always resort to a past experience. Shall we deal with this like we did in this case or that case? Yes, that’s perfect. We’re on the same wavelength. That level of trust is very hard to achieve. It happens with a small number of people in life and you earn it through many experiences. 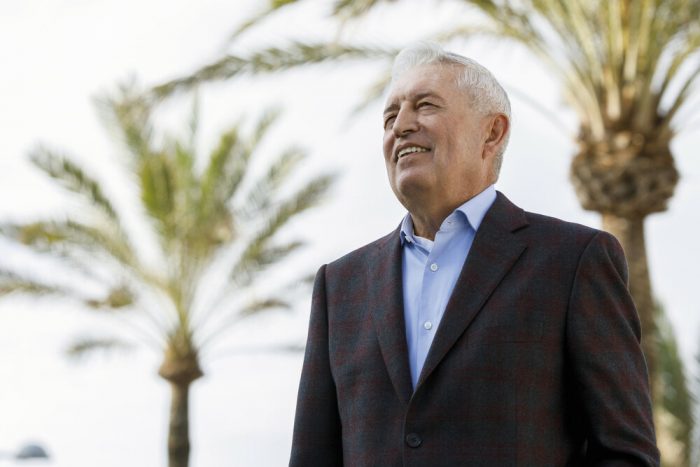 And it’s not that Rafael Expósito is an easy-going character that goes along with anything and everything. No. He’s no pushover. If something doesn’t seem right to him, don’t worry, he will tell you. But he’s in the right position to do that.

“The thing is, you have to have a strong will to pull the cart. If the captain doesn’t steer properly, the whole ship goes off course”, he explains. That reminds me of an anecdote that came out of a moment of pressure. In those early years in Punta Cana, money was tight and we had to justify every penny we spent. Rafael queried some of the things we had bought for the new disco we had just opened and, with the pressure I was under, I got quite angry. “It was late and Luis Riu asked me for an amortisation schedule for 7 a.m. the following morning. At ten to seven he was already waiting for me on the stairs, and I had it under my arm. I presented a plan to recover the 45 million peseta investment in five years, and in fact we started making a profit in two. Once again, that wasn’t working, it was inventing: we brought over the best bands, the parties became famous and all the hoteliers in the region came, along with their customers, and rum brands sponsored the events. It was a resounding success.” 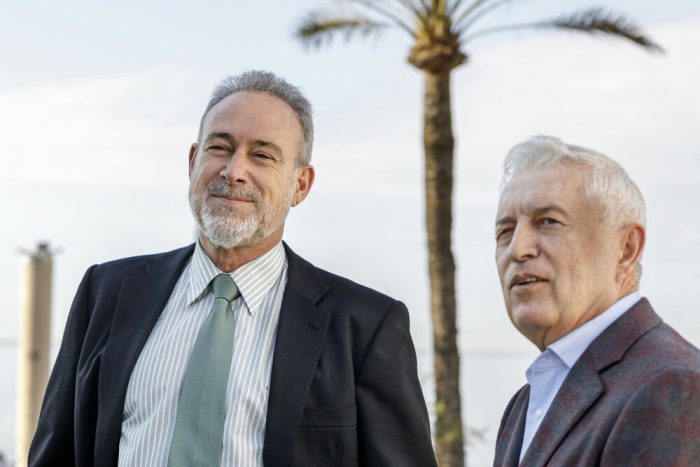 Luis Riu and Rafael Expósito, in a recent photograph in Playa de Palma.

Rafael Expósito, a career full of great projects with the Riu family

In the Dominican Republic, he was head of Purchasing as well as Food and Beverage at that time. He had been there for the launch of the first international hotel, Riu Taino, and he was also there to open our first all-inclusive hotel, Riu Merengue in Puerto Plata. These are both defining moments in RIU’s history. He came back to Palma for a time as a director in the F&B department, before returning definitively to the Caribbean. He landed in Mexico when the destination was growing and we needed someone we trusted. At first, he was also responsible for Miami, Cuba and Jamaica. When the number of rooms meant we needed the dedication of a single person, Alejandro Sánchez stayed at the helm of the English-speaking Caribbean, while Rafael focused on Mexico.

New York, the icing on the cake

“But life had another surprise in store for me. Have you brought winter clothes? That is what Fernando García, executive director in charge of Operations in America asked me one day. That’s how I was made director in New York, in charge of opening our first hotel in the city. That was hard, it was nerve-racking, but it was the icing on the cake in my career.” Who would have thought that the young Rafael in the olive groves of Jaén would end up in a position of such responsibility around the world and, eventually, in the iconic city of New York? 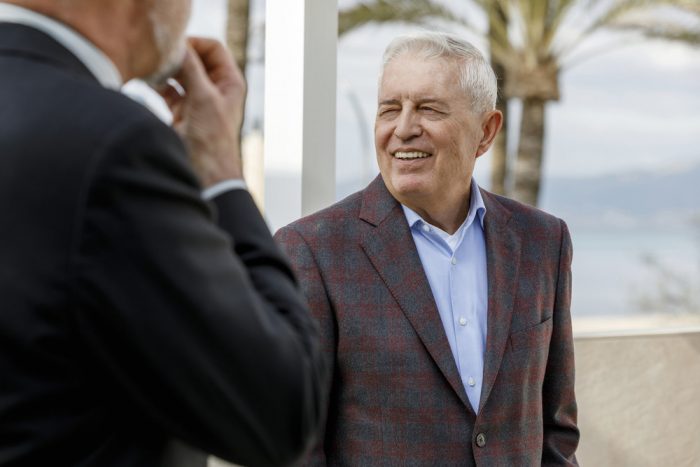 Rafael Expósito, a legend in the RIU chain.

Rafael Expósito: “At work, you must always be on the move”

Today he feels great pride to have been involved in all these ambitious projects – “and they all turned out well!”, he adds. “I’ve never been short of work, but I’ve never had too much either. Luis Riu Güell has always supported me and I’ve always given 100%. You have to enjoy what you do and, as we started saying in the Dominican Republic, we always have to be moving at work, always frying and eating, and that’s what makes it so tasty,” Expósito laughs. “In this company, there are plenty of opportunities for those of us who are hard-working, and in my position, I always support internal talent, because hard work and merit are rewarded with a good career,” he adds, with a more serious tone.

He has worked with all the generations of the Riu family and won respect and affection from all of them. I don’t like to raise the subject, but one day it will be his time to retire. “Well, I sometimes wonder, what am I going to do at home, sitting around? But I feel that after all these hours, all this travelling and all this dedication, I owe it to my wife, my daughter and my grandchildren to dedicate my time to them.” That is what Rafa says, so although it is only for now and only for a short time, that question still doesn’t have a specific answer, and we will be lucky enough to keep collaborating with him. That is something I am very grateful for, now more than ever as we fight to get through this unprecedented crisis.

Share the post "Luis Riu: “Today I am paying tribute to Rafael Expósito, RIU’s longest-serving staff member who has been involved in almost all of the chain’s major milestones”"