Luis Riu: “Every new hotel is the accumulation of the experience acquired and an opportunity to improve”

When I arrived at the Riu Palmeras construction works in 1984 I had no idea that it would be the start of one of the greatest passions of my professional career and also one of the keys to my management at the helm of RIU. The previous post discussing the renovation of the Riu Palmeras inspired me to look up this information. I have now managed a total of 123 hotels. During the first few years they were mostly newly constructed buildings, while we now have a combination of both major renovation works and new hotels.

Luis Riu, during a visit to the Riu Plaza España hotel construction works.

Although this is of course a very high number, the fact that it is very important for RIU’s business development is what is vital here. These have been 123 opportunities to make the most of all our know how, to improve our product, to phase out certain plans and services in order to focus on more effective options and to try out new things. My technical team and I run our own R&D&I lab and we implement our tests and make errors and improvements for each new project. Every new RIU hotel is the accumulation of the experience acquired from previous hotels.

In truth, before moving to Gran Canaria I had not been particularly interested in the building works. But I soon came to realize that this stage of the project is precisely where the quality and the service for our clients is defined. Moreover, efficiently managing and controlling the costs is decided long before the first brick of the hotel is even laid.

Over time, this passion for architecture and engineering has been pivotal not only to the product and service we offer our clients but also to RIU’s policy of expansion. Paying attention to the most minute details can only take occur if we own the hotels, which also gives us tremendous freedom to make decisions. We chose to invest in more than one hotel per location given that logistically, commercially and cost-wise it leads to multiple synergies, in addition to our long-term commitments to the countries where we have our hotels. Ownership and direct control of our projects are the main elements that differentiate RIU from other hotel chains.

“The help of my father, Luis Riu Bertrán, and my mother was absolutely essential”

During my first few years in the business I had the help of my father and mother. To this day my mother is still referred to as Doña Pilar; she knows a lot about this industry and worked tirelessly. I had all the enthusiasm of youth and my parents had the experience of having built seven hotels in Mallorca in addition to over 30 years of managerial experience.

Basic plan of a RIU hotel, according to Luis Riu Bertrán

My father, Luis Riu Bertrán, knew exactly what the basic plan of a hotel should look like:

Everything is simple, close at hand and designed to please our guests from the moment they set foot in the hotel. More than 65 years have passed since this basic plan was outlined and it is certainly the case that, with its variations, these basic tenets have remained to this day.*** 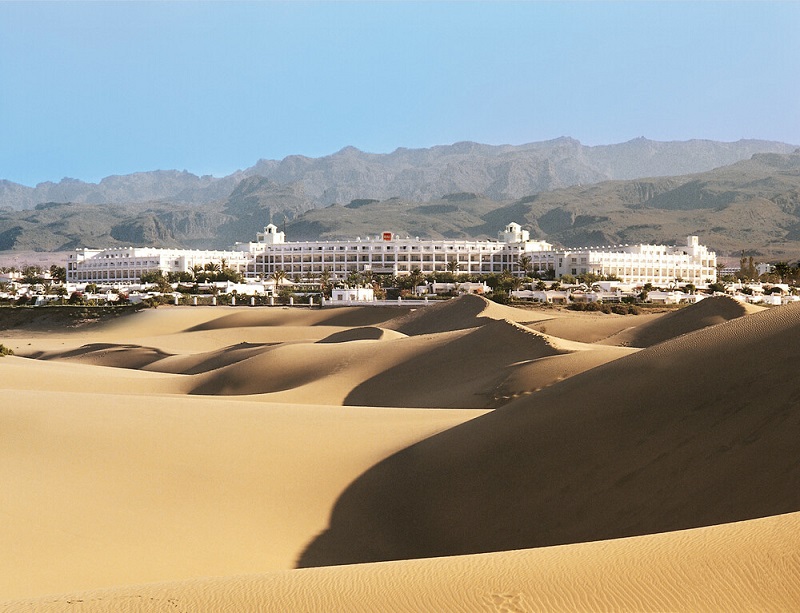 Riu Palace Maspalomas, one of the first hotels to have its construction works directed by Luis Riu.

We built the Riu Papayas Flamingos hotel and the Riu Palace Maspalomas in Gran Canaria and the Riu Ventura Maxorata hotel in Fuerteventura before moving on to Punta Cana where we had to face RIU’s biggest challenge so far. As Ramón Arroyo and I already mentioned, overcoming the difficulties of development without resources or infrastructure in Punta Cana prepared us for anything that would come up in the future. Over the years I have come to classify construction works into three difficulty levels, ranging from the least to the most complex:

This is where you have to make all the decisions yourself. You start off with a blank slate and any obstacles that arise can be dealt with through adaptations and modifications. The particular case of our hotels in the Maldives warrants its own special section in this first category. The sheer logistical complexity of building them means it is hard to merely keep them in the first difficulty level. 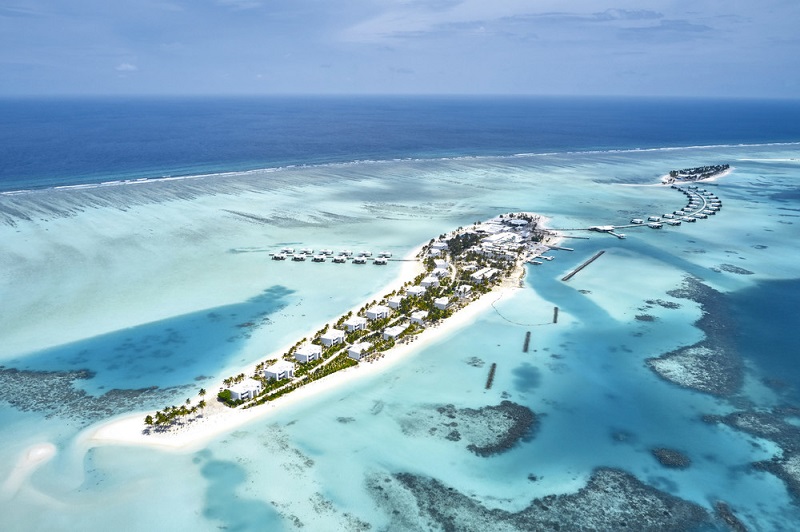 The Riu Atoll and Riu Palace Maldivas hotels, the most recently opened hotels in the chain, were a huge logistical challenge due to being located on small islands. Luis Riu explains that the planning and execution of these construction works was the most complicated they had ever undertaken.

2.      The complete renovation of a hotel built by RIU

With these construction works you are already aware of the hotel’s history and you have all its documentation. You also have the experience of running the hotel which has shown you all the good things worth keeping and what needs changing.

In these cases we do not usually get to see all the building’s documentation such as the original plans and we often face a wide range of unforeseen events during renovation.

These were the three difficulty levels we had encountered until we began work on the Edificio España.

It is such a special and complicated project that it deserves its own separate category. This category is reserved for the comprehensive renovation of a listed building that was not originally yours and is located in the very heart of Madrid. However, this hotel, which will be our next hotel to open, has been such an exciting project that I believe it deserves its own chapter.

Progress of the RIU hotels over the years

Despite sticking to our basic tenets, the hotels have evolved in a number of ways over the years. The introduction of the All Inclusive concept at the Riu Merengue in 1996 was one of the initiatives that most affected the installations, because this business model requires a far greater offer of entertainment, food and drink.

Another major revolution occurred with the large-scale renovation works that we began back in 2010, since these brought with them a new and more modern style. We also opened our first city hotel in Panama in that same year of 2010 and these urban hotels have meant we have had to learn a lot and adapt to a completely different model than the resort hotels.

In 1984 RIU’s Technical Advisory Office (GAT) was comprised of a sole member, the architect Miguel González. Three years later the engineer Miguel Gelabert joined the team as well as Enrique Vargas, who was doing construction works administration at that time, and these three together made up the technical team.

Today the GAT has over 30 people. Francisco Hernanz manages a 13-strong team of engineers, architects, draughtsmen and surveyors; while José María Sanchís has a team of 15 people, including architects and engineers as well as works supervisors The interior designers Martín Fernández, Agustín Díaz and José Soria also work with us. This is a fantastic professional team capable of carrying out up to 10 major projects a year.

Challenges that have defined the RIU hotels over the years

As well as the major milestones in terms of the design of the hotels, there have also been specific projects that really stand out for us. Opening hotels in Cape Verde, especially on the Island of Boa Vista was a huge challenge; the Riu Plaza New York Times Square hotel taught us so much; and now the Maldives, with the complications that an island country brings, which involves building on land where everything has to be brought in by sea, as well as preparing the islands themselves to receive these materials…

All of these challenges leave me wanting to look for new opportunities in order to make the most of what we have learnt. This ensures you won’t make the same mistakes again and helps you pinpoint where there is room for improvement.

Luis Riu: “The next hotel to be opened will be the Riu Plaza España”

I am currently focusing on the Riu Plaza España, which will be the next hotel to open out of the 7 new hotels RIU plans to open in 2019. Together with my team we are making the finishing touches to an exciting project which we have managed to carry out in record time. There will always be difficult moments but seeing the final outcome and our happy guests is a far greater satisfaction.

Share the post "Luis Riu: “Every new hotel is the accumulation of the experience acquired and an opportunity to improve”"

What is there to do in Lanzarote with RIU?

So much to discover in Portugal with RIU