Luis Riu: We’re Ending 2020 with Our Arrival in Dubai, a New Milestone and a Great Challenge for RIU 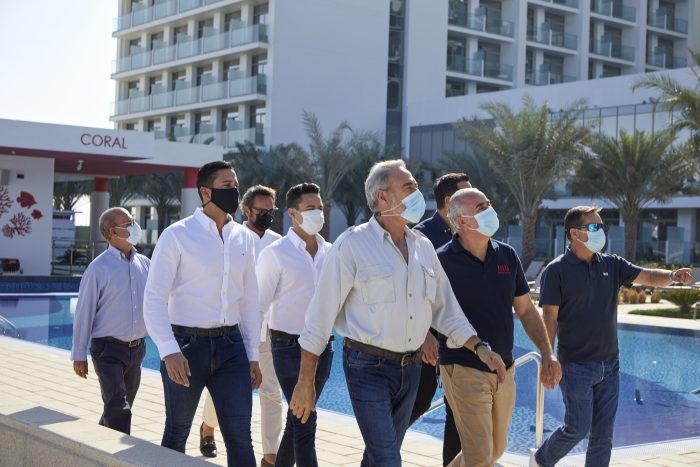 Luis Riu goes over the details of the Riu Dubai with his Operations team before the opening.

We have just come back from Dubai, where we presented the star project of the year that is drawing to a close. Early in the year, I announced that this would be the grand opening of 2020, just as the main protagonists of 2019 were the hotel Riu Plaza España and the two Maldives hotels.

When we spoke of plans, we could never have imagined that the Riu Dubai would open its doors in the midst of a crisis like the one we are in. But I will focus on the positive: we have successfully opened the hotel, and with it, marked a new milestone in our international expansion. The first hotel in the Middle East, the first in the major international tourist destination of the United Arab Emirates, and also the first of its category in Dubai, given that we are bringing all our experience in 4-star hotels and 24-hour all-inclusive service to this hotel, to attract a new client segment to the Emirate. 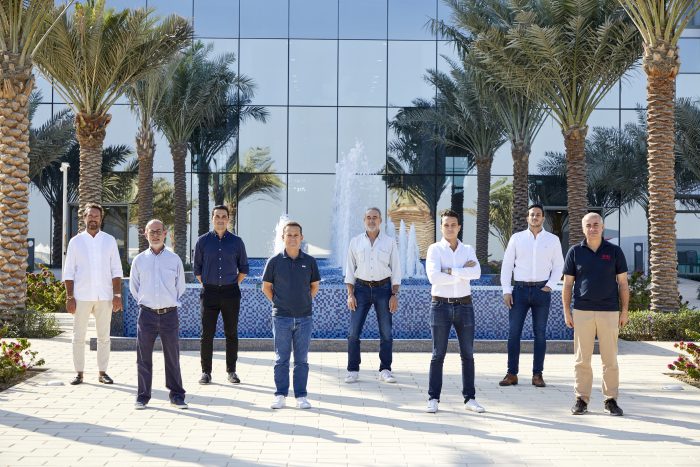 Luis Riu, with his Operations team at the new Hotel Riu Dubai.

As is my habit, I spent the days leading up to the opening taking care of the final details. I was there with our Operations team in the destination, led by director Carles Madrenas and with his right-hand man in the Indian Ocean, Giorgio Chiarel. Jesús Nieto, our in-house engineer who went from the Maldives project to the Dubai one, was also there, along with Agustín Díaz, in charge of interior design as well as for the Riu Plaza España, and my sons Luis and Roberto.

Over those days, I thought a lot about Francisco Hernanz, RIU’s head architect for Africa, Asia and Europe, and this project’s lead. Francisco, who we called Paco, passed away in April due to Covid-19 and not only do we miss him sorely as a friend and colleague, but also we know it is impossible to replace his talent. Paco worked with me for 23 years, and iconic hotels such as Riu Touareg in Cape Verde and Riu Chicalana are the result of his labour. He didn’t come on the opening trips; rather, we travelled together constantly in the earlier stages of the projects and we were in Dubai together in February. This hotel is special for several reasons. One is that we went to Dubai precisely because of our specialisation in large, all-inclusive, 4-star hotels, but at the same time we had to adapt to the halal rules that govern some of the services and areas. I think Paco would have been proud of the result, although without doubt he would already be focusing on the next project, such as the hotel in London. 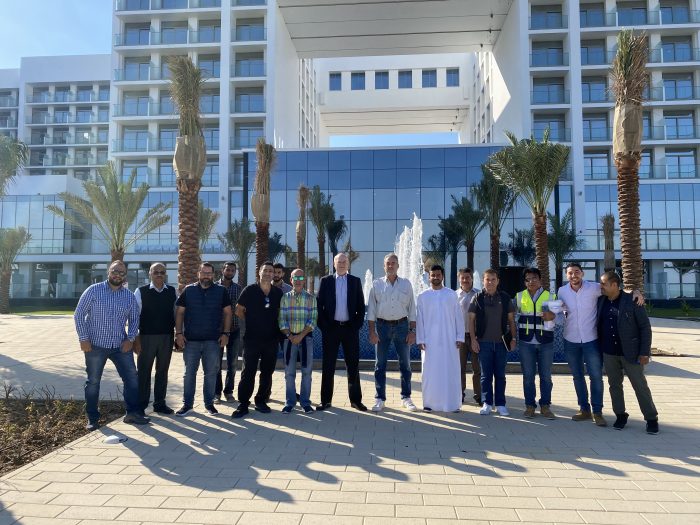 RIU’s head architect Francisco Hernanz, who died in April from COVID-19, on the right side of Luis Riu, during a previous visit to the Riu Dubai.

The Riu Dubai Hotel, an innovative project born from our alliance with Nakheel

Riu Dubai is the result of a joint venture with Nakheel, the major project developer of the Emirates. It is the company behind projects as famous as Palm Jumeirah and the more recent Deira Islands, where the Riu Dubai hotel is located. This has been a success story. They opened the doors to this destination for us and gave us the opportunity to introduce the RIU product to the region. At the same time, they can add a new hospitality concept to the Emirate, taking another step towards the goals Dubai has set out for its tourist industry. For the grand opening, we were honoured to welcome the Chairman of Nakheel, His Excellence Mohammed Ibrahim Al Shaibani, a real celebrity in the country.

I’ve returned from the visit very satisfied. The hotel is ready and launching its operation. Now comes the hard part: marketing it and achieving the satisfaction of our guests, day after day. I have no doubt that we have the infrastructure and the team we need to achieve it. I’d like to take this chance to wish you all health and happiness for this festive season, and that 2021 is infinitely better than 2020 for us all.

Share the post "Luis Riu: We’re Ending 2020 with Our Arrival in Dubai, a New Milestone and a Great Challenge for RIU"

The Riu Montego Bay – before and after

RIU wishes you a Merry Christmas!