Luis Riu: “The Riu Palmeras marked a before and after for RIU and for my professional and personal life” 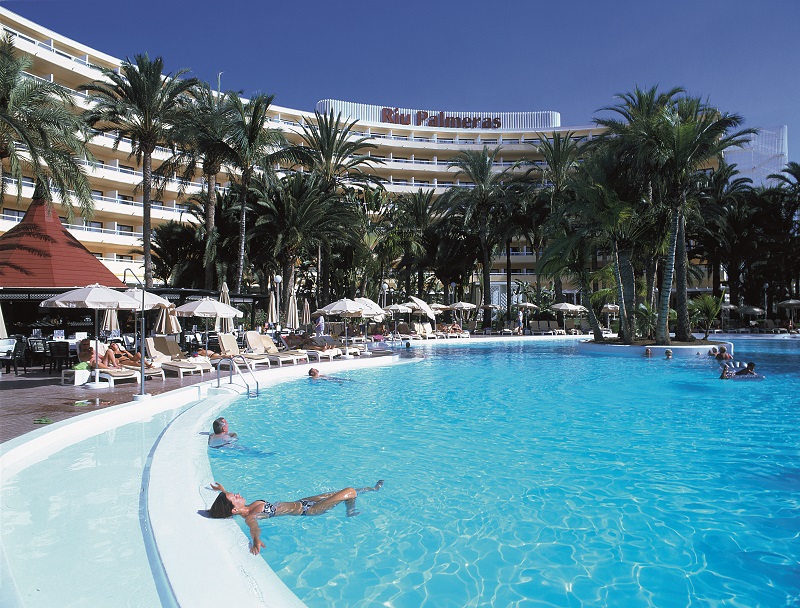 Swimming pool of the hotel Riu Palmeras, in Gran Canaria, currently under renovation.

One of the projects we mentioned at the start of the year is the complete renovation of the Riu Palmeras in Gran Canaria, which has just begun. It may not be the most impressive of all those we plan to carry out throughout 2019, in that it is very complicated to compete with the Riu Plaza España and the two hotels in the Maldives. On a personal and professional level, however, it is the one that has meant the most to me. Looking back today, I can say without exaggeration that this hotel marked a before and after in the history of RIU, in my professional career and even in my private life. That’s how important the Riu Palmeras is, a property that opened on Playa del Inglés in 1985. 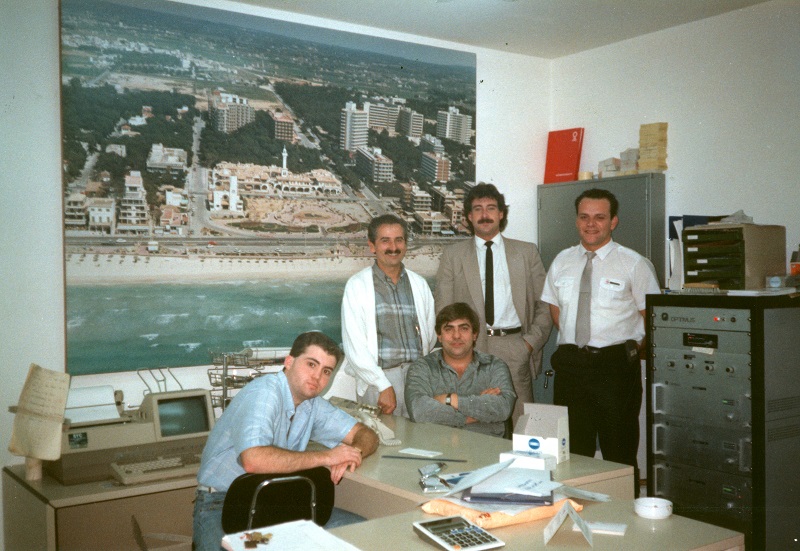 Luis Riu and his team at the RIU Group office.

Back then I worked alongside my sister Carmen in the office of the hotel Riu Obelisco, trying to learn financial management from her. After all, I had just finished by degree in economics in Barcelona, even though I had already realised that sitting behind an office desk checking balances and income statements was not for me. I liked action, controlling the figures at the point they were being generated.

Heading up the opening of the Riu Palmeras, the major assignment from my father, Luis Riu Bertrán

Two years before starting the project in Gran Canaria, my father, Luis Riu Bertrán, and my grandfather, Juan Riu Masmitjà, started to plan the opening. They were months of intense pressure calling for great sacrifices from every team and all the hotels in Mallorca in preparation for that first major investment outside the Balearics. My father had found an appropriate plot of land and contracted a highly respected Canarian architect, Luis López, to design the hotel. Shortly afterwards the work began and they sent me to Gran Canaria to supervise the progress of the project and then to take on the responsibility of being the director, regional representative and sales manager. 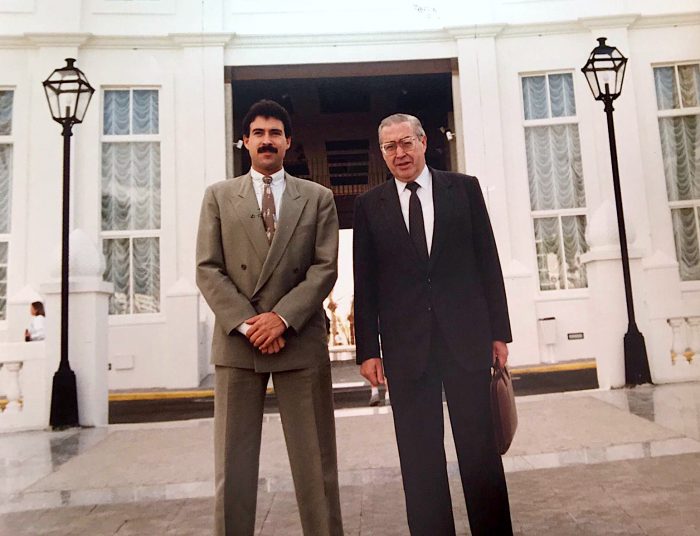 I have to laugh when I think of how we started off back then. You have to think back to the Spain of the 80s in an industry that had great potential for tourism. No mobile phones, no email, no RIU offices, no family members, no employees. Until the hotel was actually built, calls were made from public phone booths and I was virtually working out of my car as an office.

The Riu Palmeras defined the career of many great RIU professionals

But I was not alone for very long. I was lucky in that both Juan and Luis Riu, my grandfather and father, had a clear goal of making a qualitative leap with the Riu Palmeras. They wanted to outdo themselves in terms of product and service and recruited the best of the best workers of RIU in Mallorca to go and run each department of the new hotel. That was the beginning of the long careers of great in-house professionals such as Pepe Moreno, Alejandro Sánchez, Rafael Expósito and Félix Casado. But that is a story worth concentrating on in a future post, in the same way as I told you recently about the case of Ramón Arroyo. It is impossible to sum up in just one paragraph what they represented then and what they continue to mean today for RIU. 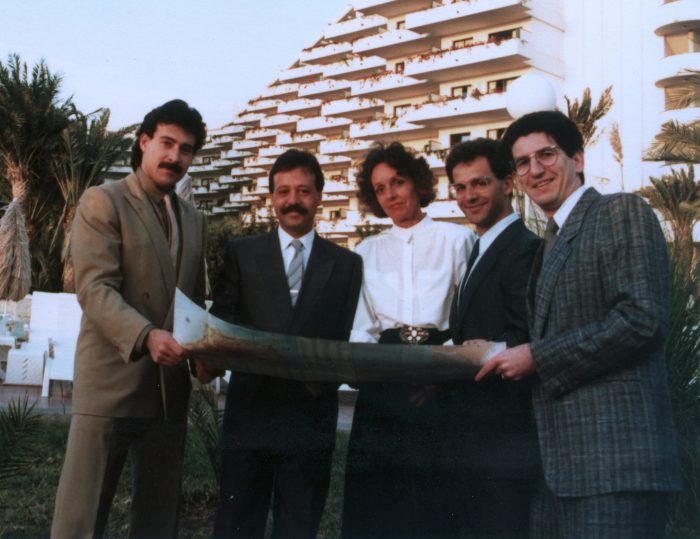 Luis Riu with the team that led the opening of the Riu Palmeras, the first Riu hotel in the Canary Islands.

Luis Riu: “With the Riu Palmeras we learned how to operate a hotel all year round”

Going back to the before and after for RIU Hotels, the Riu Palmeras, which from August will be the Riu Palace Palmeras, was the first hotel outside the Balearics and the first that didn’t close down out of season. There we learned how to operate and commercialise the property all year round, as a prelude to our expansion into the Caribbean which would happen just six years later.

As for me, not only did I make my debut as a regional representative, works engineer, sales manager and the director for expansion, I also finally found myself in a position I was passionate about and that I have continued to develop over my subsequent career. The hotel also, for the first time, enabled us to come into contact with the Canarian people, who have been a joy to work with over the course of so many successful years. 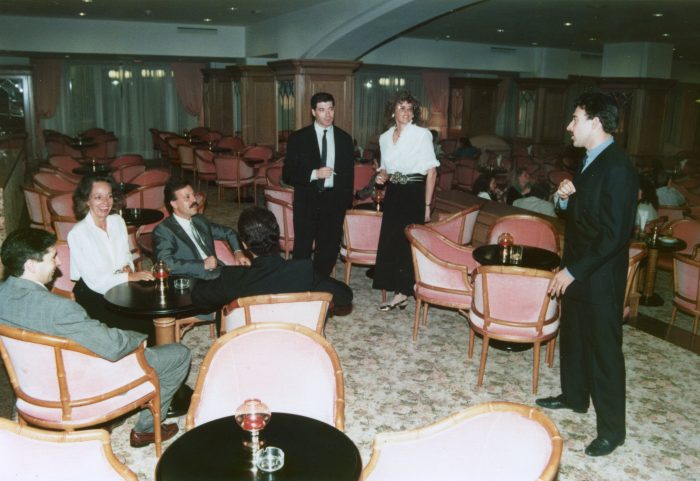 Luis Riu, in a meeting with his team in the bar of the Riu Palmeras.

The Riu Palmeras: a key place for Luis Riu and his wife

It was also in Gran Canaria that I met Isabel. I lived in one of the hotel’s bungalows for five years. That is where I used have breakfast, lunch and dinner and where I worked. Every Thursday, the hotel organised a fashion parade that she used to work on. She caught my attention from the very first moment. Each one of us took an interest in each other. Who would have said, when we went out together for the first time in 1986, that just four years later we would be together in Punta Cana, starting our family of three children and a marriage that has lasted over 30 years. 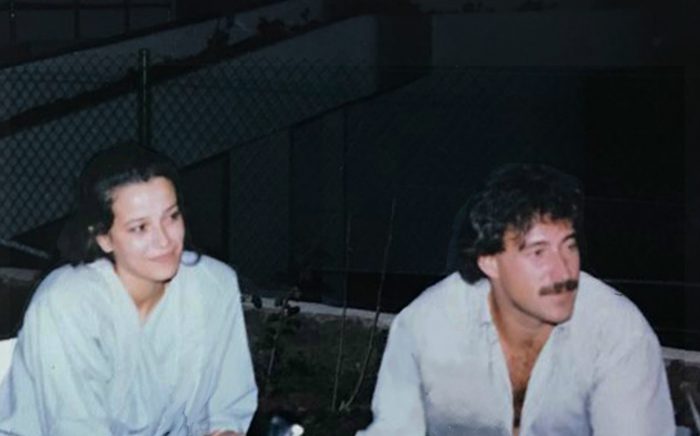 Luis Riu with his wife at the Riu Palmeras .

Share the post "Luis Riu: “The Riu Palmeras marked a before and after for RIU and for my professional and personal life”"